In all the years we have been sailing and chartering in the British Virgin Islands, there is one spot that we always make the first and last anchorage of a cruise. The Bight at Norman Island is a big deep bay that has a perfect beach at its head. The bay is full of moorings that you can pick up or you can anchor outside the mooring field. The Bight is open to the west but well protected from the easterly trade winds and usually calm at night—perfect for swimming, snorkeling and paddleboarding.

The big news from the fall of 2013 was that Pirates, one of the best beach restaurants in the B.V.I., had burned to the ground. That’s the bad news. The good news is that somehow the owners have been able to build an open air pavilion with a deck, bar and limited food service just to the north of the dinghy dock. This opened in January 2014 and work has gone ahead to rebuild Pirates in its old glory. Amazing recovery for da Caribbean, mon!

We like to anchor on the north side of the Bight inside Water Point. That puts us near the rock and coral formations just off the point, which are some of the best in the islands. And, it is only a short dinghy ride to the caves in the cliffs on the west side of Treasure Point where you can snorkel right inside. Legend has it that many years ago local fishermen found a chest filled with gold doubloons in one of the caves.

Norman Island supposedly was the inspiration for the novel Treasure Island since it was frequented by mutineers and may once have been owned by a pirate. In the 18th Century, stolen treasure from a Spanish galleon was buried on the island and later recovered by the British Navy, all of which happened in the same time frame as Robert Louis Stevenson’s famous tale.

The floating pirate ship and bar The Willy T is moored in the Bight and is a fine place for afternoon painkillers and some innocent revelry. Dinner ashore at Pirates is always pleasant and on weekends there may be a jump up with a band from Road Town. 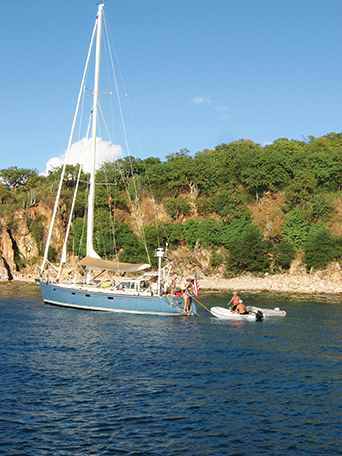 Then it’s back to the boat and the quiet of Water Point, the bright stars and the whisper of the trade winds blowing through the trees on the cliffs above the anchorage.