How magnetic compasses work in the real world  (published January 2014)
It was a bitter cold night. We left Newport, R.I. at 0300 that morning, and we were still about 60 miles north of the warm Gulf Stream. Fortunately, winds were WNW at about 25 and when we were to arrive at the northern wall of the Stream the wind would not be pitching against the current, raising steep seas. The important consideration was to make sure we hit our waypoint, entering the Stream where it had a southeasterly flowing current so we could minimize wave heights while also gaining some boost from the current as we headed SSE towards the Caribbean. Climbing through the hatch to relieve the deck watch, I looked up at the brilliant stars against the black sky.  There was Polaris, a good friend through many miles at sea, slightly to the right of the backstay.  All was good.

It isn’t always so good, however, and checking my heading is usually the first thing I do at a watch change. It’s a habit that has served me well. Whether I could discern our course from the stars or had to check the binnacle compass, I usually checked one against the other. The stars don’t lie. The binnacle compass doesn’t lie very often. Both are important, but the binnacle compass is far easier to see in a squall, during daylight or when steering. I’ve come to know that my safety and the safety of the vessel I’m aboard can depend on that compass. In order to understand what it’s telling me, however, I need to know a little bit about its own language. 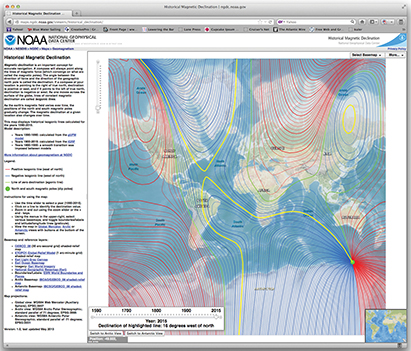 MAGNETISM
To understand compasses, one must first have a basic understanding of the earth’s magnetic field.  When thinking of the magnetic field surrounding the earth, think of a bar magnet thrust through the center of the earth and inclined at about an 11 degrees angle to the earth’s rotational axis.  One end of the “bar magnet” extends to a point somewhat off the North Pole—in the vicinity of 78.9 degrees N / 103.8 degrees W, to be more precise. The other end of the “bar magnet” is somewhat off the South Pole—near 65.4 degrees S / 139.5 degrees E. The magnetic field splays out from these poles around the world in all directions. The ever-changing magnetic field has several components placing it in space.

Knowing the direction of the magnetic field is still only part of the problem, however. There are near-proximity local conditions that will also affect the compass needle.  Deviation will take those conditions, such as an engine block or steel hull into consideration, helping to further refine the accuracy of the compass.  To a certain degree a compass can be adjusted to compensate for the local surroundings by adding or shifting small magnets near the magnetic compass. But on different headings, the effects will vary, requiring the use of a deviation card to correct the compass by several degrees.

Of course, those deviation cards do not account for someone coming on deck, placing a boom box with oversized speakers next to the magnetic compass and steering blissfully through the night. That will have a profound impact on where you find yourself in the morning. I know.  Magnetic compasses have improved greatly in the last decade, but not so much so that they can accommodate ignorance.

COMPASSES
Weems & Plath and Suunto offer magnetic compasses that can be used globally, even in the high latitudes of the northern and southern hemisphere. Magnetic compasses have several advantages over other types of compasses. They don’t require electricity to work. If there is an electrical failure, lighting can be provided by flashlight or Cyalume stick if necessary, and the compass will still point the way.  Depending on how the conventional magnetic compass is mounted, it may be used to take bearings as well as display the vessel’s heading. And, the display is analog, which may or may not be preferable to a digital display.  While traditional magnetic compasses have a centuries-old history of reliability, they do have some disadvantages.

That is not the only problem encountered by compasses, however. Magnetic disturbances around the compass can also cause compass error. Large ferrous objects temporarily coming in close proximity may cause errors. As I found out in earlier years, placing a knife or radio speakers close to the compass will inevitably cause the instrument to read incorrectly.  Additionally, current passing through wires or around windings can cause a magnetic field. If there is wiring in the vicinity of the magnetic compass, the positive and negative leads may need to be twisted or shielded cable may be required to minimize the magnetic disturbance.

Other factors that can shift the magnetic field include geological and atmospheric conditions such as volcanoes and solar storms. Approaching Stromboli and its volcanic activity off the Italian coast several years ago, not only was the compass affected, the GPS stopped outputting data temporarily, as well. Another, usually minor consideration is that the earth’s magnetic field can shift on a diurnal (daily), yearly or even longer (secular) basis. Some of these shifts are predictable to a degree and will be indicated on some marine charts.  Others are not.

There are a number of ways that a magnetic compass can develop problems. The glass dome can become crazed over the years. Oil can leak out and create an air pocket in the compass. If left too long, the air bubble, which contains water particles, can cause pitting of the compass card or other internal components. You may be traveling in the deep southern hemisphere with a compass that has its gimballing set for the northern hemisphere. Most compasses are setup to be optimized for a particular geographic location. Most of Suunto’s compasses, for example, are optimized for one of five separate geographic locations based on the dip or vertical component of the earth’s magnetic field. If you have the compass set to one area and the area in which you are located has a dramatically different magnetic field, the rate of response can be slowed.  The positioning of the compass’s magnets aren’t aligned properly with the earth’s magnetic field. 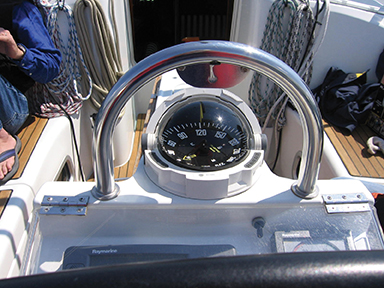 Magnetic compasses may have their limitations. The fact is, they are usually one of the most reliable instruments you have aboard. They can be critical to not only hitting your waypoints correctly, when all else fails, they may be the instruments that points you toward home. Treat them with the respect they deserve. The success of your voyage may depend upon it.