Bram had been waiting for me in the Caymans for three weeks and was tired of being surrounded by giant cruise ships and thousands of his new best friends who poured off them. “I was thinking that we should go some place no one has been before”, he said to me as we made plans to leave Grand Cayman. That seemed to be the definition of adventure to me—to go where no one ever goes. I wasn’t sure if that really would define the Swan Islands in the Bahia Honduras, but it seemed like a good idea. A chain of three small islands about 185 miles southwest from Grand Cayman, they offer no amenities, have no permanent population and are not on the usual route to Honduras, Guatemala or Belize. We raised anchor, waved good-bye to friends and about 40 hours later, we arrived at 4:30 in the morning, not quite daylight.

SWAN ISLANDS
We used Navionics almost solely as our navigation source. It is an amazing tool and it took us around to the bay in which Bram had wanted to anchor. He and Navionics were spot on and as the sun rose we were looking at the quay for Honduran Navy boats that came in every 45 days to switch out the garrison of six young men stationed there. Soon after first light, four to five young men showed up on the quay looking out at us. I wondered if they were thinking, “no one ever comes here!” Bram lowered the dinghy, grabbed our papers and went to meet them. When he returned sometime later he told me that the garrison had run out of food two weeks earlier and the men had been living off the land, hunting iguana and eating the bananas. The story was that, toward the end of March a boat with 47 Cubans refugees stopped at this often used waypoint on their way to the mainland. Honduras does not extradite so refugees are safe from being sent back to Cuba and likely jailed. The garrisoned young men shared all they had. Bram went right to work filling a very large grocery bag with food that was extra and also the stuff he didn’t really like. We got in the dinghy and headed toward a place filled with stories left on the beaches and in abandoned buildings.

Most cruisers skip the Swans and go straight to Utilla or Roatan. The islands sit by themselves 95 miles off of the Honduran mainland. Great Swan is two miles long, Little Swan one and a half miles long and Booby Cay (not a topless beach) is about 100 yards in length. Great Swan had been a guano operation, coconut plantation and a weather station for the U.S. at one time but, more interestingly, a communication center during the Bay of Pigs invasion. Radio Swan, also known as Radio Marti was used to broadcast propaganda. In 1971, the U.S. recognized the Honduran claim to the islands and in 1982 they became a Honduran Territory. Much of the infrastructure left by the Americans had been destroyed by the 180 mph winds of Hurricane Mitch in 1998. We got the grand tour from the senior member of the garrison. First we walked to the west of where we were anchored. As we came up and over an embankment, we were treated to a golden sandy beach and a lovely rock formation, but it was what lay beyond that was truly interesting. There was the hull of a boat, which, I was told, was used by Cuban refugees to get to Honduras. What was left of the boat were strips of sheet metal bolted together and that was covered to the waterline or a little higher with fiberglass and epoxy which adhered poorly to the metal surface. An engine block and some wiring sat in the sand filled broken bottom. It is no wonder that many Cuban lives are lost in these adhoc one-way boats. From what I understand, the 47 Cubans who arrived in March, came in a boat much like this. I was stunned by the thought of what it must be like to face a Caribbean squall in such a boat over-filled with people and all of their hopes.

EXPLORING THE ISLAND
We walked further along the beach. Untouched collections of shell and corals lay there ready for beachcombers and tourists, but this is an island where no one ever goes. Not slowing down for me to beachcomb for souvenirs, we walked briskly back up over the bank to a densely wooded area on a well-defined path. Just off the path, there was a fallen radio tower, 100 feet long lying with bracken growing around and through it, red paint still evident. It too fell victim to Hurricane Mitch and also a Honduran government with no money to maintain or rebuild. At the far end of the tower lay its platform with the rotting remains of how it worked, including computer components and large batteries that had split open and spilled all of their pollutants into the island soil. I wondered what propaganda and secret messages had passed to Cuba over the airways from here during the Bay of Pigs debacle. We walked back to the compound made up of a group of buildings left from days gone by and not improved on since.

One building we passed was covered with names scrawled, along with dates and messages. This is where the Cubans stay—for two weeks this last time. They write their names together as a group, numbered, and add messages, some of them personal, some political. The building is missing sides and some flooring. Clothing and bedding are scattered around the rooms. 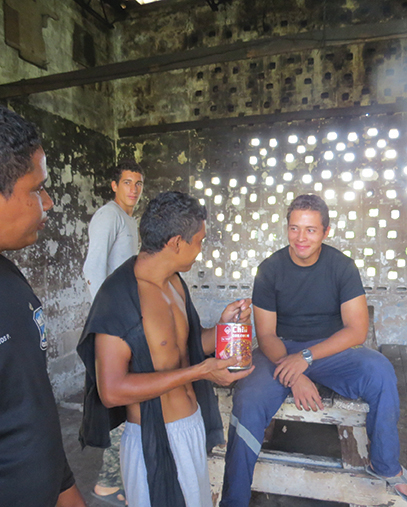 The barracks, where the young men stay, is a low building of several rooms with old iron beds or cots with various colored bed coverings. At the near end of the building is a large kitchen/communal area. There is firewood for cooking with a raised grate on top. The room is furnished with a long table for prep and a couple of picnic style tables for eating and playing checkers. The one remaining vestige of an American presence is the 3,800 foot long airstrip. We walked there past foundations of stone laid with slate tiles all separating into layers and becoming dust. The airstrip is long enough for the largest planes to land. It once handled DC3s. Its full length is no longer needed, which is good because the young men garrisoned here keep the runway clear with weed whackers! Even at its shorter length, that is a lot of whacking. Returning to the barracks, we found that the young men had opened a large can of chili con carne and were sharing it, each having spoon in hand and eating with great gusto. Another young man had a fire started and was cooking the rice. Everyone had gone through the goodies bag. They were only going to be on the island until tomorrow as their 45 days were over but they were going to leave with full bellies.

After our grand tour, Bram and I were back on the Donna Dee. The Honduran Navy ship came in to pick up the garrisoned men leaving six new islanders and bringing supplies and barrels of water. We waved to them as they docked but only one sailor waved back half-heartedly. However, as they left with our friends, they all waved to us with smiles, due to Bram’s thoughtfulness and generosity. Something I learned was very much a part of Bram’s being.

For the next couple of days, we explored the island by dinghy. We snorkeled on the north side and found there to be beautiful coral formations with arches and caves. There is a push to make the coral reefs a MPA (marine protected area) as they are so healthy. Sylvia Earle, a National Geographic Explorer in residence and an advocate for protection of the Mesoamerican reef system, has dubbed the reefs around the Swan Islands as the “Galapagos of the Caribbean.” She has referred to these healthy reefs as “hope spots” and we feel lucky to have visited when we did. The north side of the island has sand beach alcoves along the sharp rocky shore. The split between the islands is far too shallow and reefed for even our dinghy to venture over. We fished from the dinghy, but caught mostly toothy barracuda from which Bram carefully removed his hook and threw back. This is a place we could stay for a long time, but we needed to go. As we sailed away from Swan Island, we caught a beautiful tuna, which Bram masterfully turned into fantastic meals. He saved a couple thick long pieces that he cured in salt and sugar over night and served sliced paper thin and translucent with garlic oil drizzled on it and a grind of pepper.

Sadly or not, the island is going to be developed by an American concern into a resort property. This may mean some jobs for Hondurans, improvement in conditions on this island for the garrison, but it will also mean that the island will no longer be a haven for Cuban refugees and the health of the coral reefs could be jeopardized. Interestingly, with changes in American policy and the aging out of the Castro brothers, those dangerous Cuban boat trips may become stories from the past.

Photographer, artist and sailor, Barbara Dahn sails her own Beneteau First 305, Outrageous, on Lake Champlain in the summer and crews with friends including Bram van Dijk on his Columbia 40, Donna Dee, in the Caribbean and anywhere else they wish to go in the winter months.

View all posts by Barbara Dahn