We moved aboard Skibo, our Contessa 26, in April of 2012 and by July had twice conquered the challenge of sailing across Georgia Strait from our False Creek marina slip in downtown Vancouver, British Columbia. We were eager for the delights and sights of summertime Gulf Islands sailing. But first we had to contend with a tidal pass.

We had replaced Skibo’s original diesel engine with a well-mannered electric motor with a top speed of just two knots. While motor-sailing had its allure, we wanted to sharpen our purist sailing skills. Thus, the challenge of transiting a pass under sail. 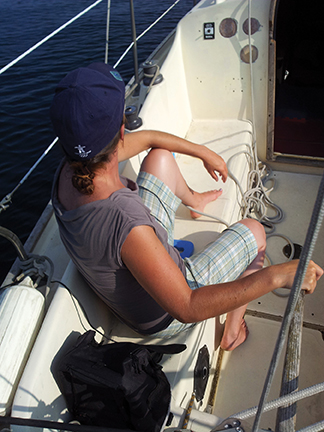 Gabriola Pass, Porlier Pass, False Narrows and Dodd Narrows are all within relatively easy sailing distances from our stopover anchorage in Nanaimo. We opted for the closest though perhaps more challenging Dodd Narrows for our first attempt. As the water passageway between Vancouver Island and Mudge Island sitting just south of Gabriola Island, the currents in this pass are known to reach nautical speeds of nine knots amid spinning whirlpools and swirling eddies, creating a potentially raucous whitewater sailing adventure.

Steerage would be critical in this particular pass, which shrinks to only 60 yards wide at its slimmest point between the bold rocky crags that line the nearly one nautical mile long channel. Short of a workable wind, we would have no recourse for steerage through opposing currents with any force beyond 1.5 knots.

Enter our need for a slack tide, that short period between tides when tidal water stops flowing before the direction of the tidal stream reverses. At slack tide, we would have the least amount of adverse current and thus the best chance of helming through the passage under sail power alone. Slack tide at Dodd Narrows generally lasts for about 20 minutes. Timing was everything.

We awoke the morning of our departure to a mild 10-knot southwest wind. We set sail in light airs under main and Genoa and we handily made the jaunt from our protected anchorage off New Castle Island in Nanaimo harbor to Dodd Narrows in less than two hours.

Our newly purchased Current Atlas: Juan de Fuca Strait to Strait of Georgia put Dodd Narrows slack tide at approximately 4:30 pm on July 11, 2012, well after our arrival at the pass. Looking ahead through the binoculars to the churning waters at the mouth of the pass we knew we had to wait for slack. But where? The waters we were in were far too deep to consider anchoring and to sail beyond the mouth of the pass to an anchorage of a decent depth would put us too far away to be able to properly and predictably position ourselves to take advantage of the change from the ebb to the flood tide.

A NEW TYPE OF MOORING

“Over there,” Michael declared from his perch on the bow and pointed to a floating log boom some 300 yards from the entrance to Dodd Narrows. “We can tie up to that boom.”

“We can’t tie up to a log boom,” I sputtered. “There’s nothing to tie to. There. . .there are no cleats on a log,” The growing anxiety already present in my mind and body was now becoming amplified by this new adventure.

“Eh. I’ll figure something out,” he said. “Ready about.”“Wait. What?” I clamored. The tension produced in an average day of sailing was an exhausting experience for me. Still relatively new to ocean sailing, I had happily assumed the position as helmsman in our two-person crew and from my post in the aft seat of the cockpit at the tiller I found the perfect spot to practice my transition from the “rail-meat” crew member role during gentle summertime sails of my youth on southern British Columbia lakes to the full scale reality of blue water sailing.

“Ready about!” he called out again. Though it’s typically the helmsman that calls out to alert the crew of a change in point of sail, Michael assumed this task, as our skipper, while I was still learning the art of reading water, wind, current and telltales.

“Ready,” I replied, the force of my exhaled breath as sole testimony of my disagreement with his decision. 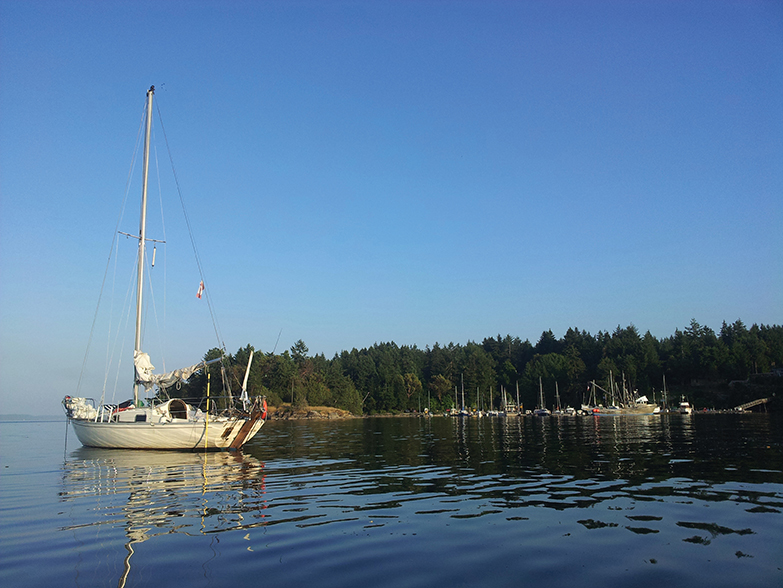 I pushed the tiller hard over to starboard to bring us across from our beam reach to a close hauled approach to the foreboding log boom. As the Genoa filled with wind once again, Skibo surged forward, gaining speed towards our destination.

“OK. So, just like when we dock. We’ll come up alongside the logs to port after we round up. I’ll drop the main but you keep the genoa tight until we’re close. Got it?”

This was posed as a question but voiced with the tone of an order from his position above a stanchion where he bent over to tie a fender for our approach. Michael had also filled three old and damaged fenders with water to sink them low enough below Skibo’s waterline to protect her from the logs. He was in his element. He loved the challenge of sailing. He loved the challenge of testing himself and his skills. I, on the other hand, was still warming to the idea of such a challenge being a friend.

“OK. Yes. OK.” I stood up, shifting the tiller from my right to my left hand and reached for the jib sheet, uncleated it and tested the tension of the wrap on the winch to make sure I could hold the sheet with one hand.

With the mainsail dropped we slowed to a manageable speed as we approached the logs. “Just like docking, just like docking, I can do this,” I whispered, my eyes fastened to the logs ahead of us as I tried to measure the distance to somehow match it to the subtle movement of my hand upon the tiller, willing the two elements to come together in one fluid movement.

I eased Skibo alongside a three-foot diameter log on the outside of the 50-yard wide log boom and I released the jib sheet. We slowed to a near stop and Michael stepped from the bow to the logs with a dock line in hand. He set about doing as he said he could do, figuring out how to tie us up to the log boom. I went below to make us some lunch and wait for my breathing to return to normal.

Three sandwiches later we were still seeing white water and running current at the north entrance to Dodd Narrows. An hour later and the tidal streams alongside Skibo’s hull had abated to an almost imperceptible crawl. 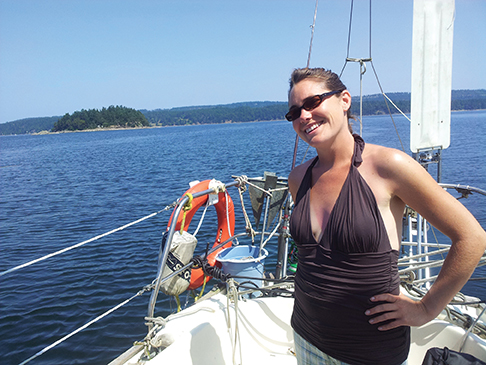 “It’s almost 4:30 and I’d say that current has definitely slowed. I think slack is almost upon us. Let’s get over there and get ready. Let’s sail through our first pass,” declared Michael.

We approached the opening to the pass as a power boat easily motored through the narrow channel, seemingly unaware of the monstrous challenge that stood before us and our small sailboat.

With the pass now clear of oncoming vessels, we launched forward, Michael up on the bow to guide us through any obstacles and me, hand fastened to the tiller with the jib sheet gripped steady in my other hand, standing at attention in the cockpit.

Before we cast off the logs, Michael had switched the Genoa for the jib so as not to risk being overpowered. I was happy to have the jib hanked on if only because its smaller size gave me a much greater view of the seascape before me.

Precaution abounding, we motored for perhaps one minute, just long enough to position ourselves in the middle of the channel and provide some directional stability. Then, we shut the motor off. 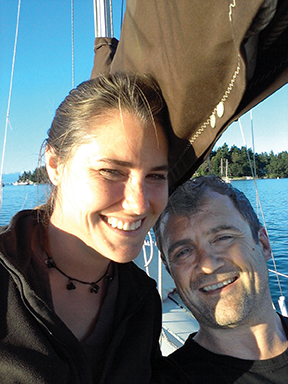 Michael raised the mainsail and jib and the main filled with a glancing breeze from our own apparent wind. We were underway. The ebb, having given way to slack tide before the flood, boasted great rises of rounded shoreline rock, lapped by the now shallow waters to reveal lucid pools of damson and mulberry starfish.

In the slim flash of time before we slipped into the pass, too far in to change course now, a bald eagle set to flight above us from its tree-top perch on the southeast shoreline of Mudge Island, dwarfed only by the sudden acrobatic dartings of the crush of swallows that flew overhead, oblivious in their whimsy to the weight of our bravery.

Water chortled along the hull as we graced our way into Dodd Narrows. During the ensuing 20 minutes we ghosted past rock bluffs that rose around us, dappled with the gnarled ferruginous limbs of arbutus trees grasping outwards amidst thick stands of virescent fir and cedar that smothered the narrow shorelines on either side of us to create a stunning enveloping silence. Silence lay atop a moving scape of west coast wilderness. Into this silence, we sailed.

And then, we were through. We sailed out of Dodd Narrows into the protected waters of the southern Gulf Islands. We did it. We had sailed through our first ocean pass. As the tension of the task slipped away, my grip on the tiller relaxed and my eyes took in the previously hidden treasures of the islands laid out before us.

The wind had dropped to a whisper. Skibo sat becalmed. Michael and I left our respective posts, stood together in the embrace of Skibo’s small cockpit and gripped one another in a thrilled embrace. This was our victory.

Kate Gilgan is a writer, mother and hesitant adventurist. From a life aboard their Contessa 26 to a rustic wilderness cabin to life with two toddlers in Bali, Indonesia, Kate and her husband Michael delight in family style discovery and exploration. When not adventuring, they live a quiet life in the mountains of southern British Columbia.

View all posts by Kate Gilgan