Plate after plate of food piled in front of us as our crew of six eagerly crowded around the open-air picnic table. In the distance, the lush green mountains of Viñales jutted up out of the earth. Our friendly Cuban cab driver sat to my right snapping pictures on his flip phone as proof that he had indeed eaten dinner with six Americans. We had been advised not to leave Viñales until dining at Casa de Confianza. The delectable piña coladas and plates overflowing with fresh ingredients from the restaurant’s garden made it obvious that we had been well advised. With a full belly, I leaned back looking around the humming table of friends and then gazed out over the gorgeous hazy blue landscape: Cuba had my heart. 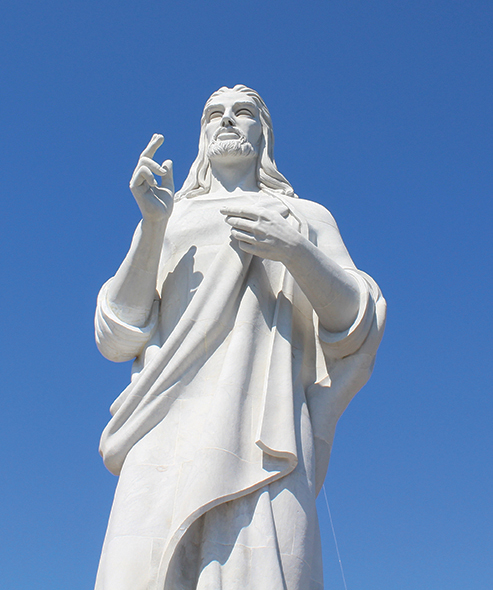 The sea has always been my home, though I am no salted sailor. Growing up, I was never more than a sea breeze away from the Atlantic. But, the honorary title of sailor is something I have only recently acquired. My husband, Joel, is a true sailor at heart. He grew up racing International 420s and when I met him, he already held the dream of living and traveling aboard. We were married in Hatteras, North Carolina in the midst of a fall hurricane and one week later moved onto our first cruising boat, a 27-foot foot sloop. So we began our trek down the U.S. East Coast as newlyweds and recent college graduates, each clocking-in with only 23 years under our belts. We were wide-eyed and thirsty for knowledge, experience, and the next opportunity life might send our way. 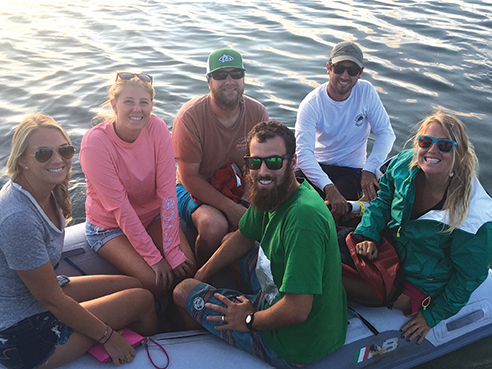 Six months into our journey, Joel and I found ourselves in the Florida Keys enjoying the company of several fellow cruisers. One couple close to our age, Asheton and Nina, quickly became our close friends. The topic of Cuba had been buzzing in the American sailing community since the U.S. Treasury’s Officer of Foreign Asset Control (OFAC) started loosening the requirements for a Cuba travel license. Asheton and Nina were already planning to make the trip themselves and invited us to join them. Just like that, Cuba became our next destination. How could we say no?

A month later, we were onboard Asheton’s 44-foot Reliance, Soulmate, departing Stock Island to cross the 90 miles that separate the Florida Keys from Cuba. We had a lively crew of six, and besides a few strangely lit cargo ships and the spontaneous excitement of reeling in a tuna; our passage was uneventful. By daybreak, the following morning, the haze of Cuba stretched across our horizon. 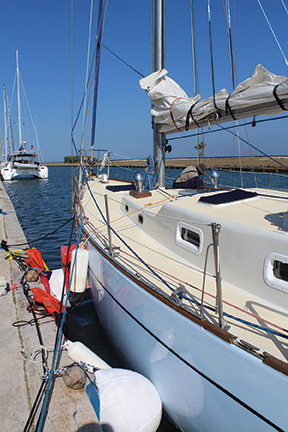 We were greeted at the Cuban customs dock by a cocker spaniel puppy, an energetic and less than intimidating search dog. This was the first of many signs that Cuba was not going to be as we had expected. After being cleared for entry, we motored through the narrow canals of Marina Hemingway to our designated spot along the crumbling seawall (plans are being implemented to upgrade Marina Hemingway). As we stepped onto shore to greet the dock master, it was obvious that the once thriving marina had suffered from neglect over the years. Later, we would discover that Cuba, as a whole, seemed to exemplify the same inconsistency—gorgeous, yet crumbling.

Our 10-day visas would enable us to explore a good deal of Cuba so, after settling in, we got to work planning. The hotel, within the marina limits, offered a place to exchange money, as well as a good spot to pick up Wi-Fi. With a few cucs in our pockets, we bought Internet cards and sat outside the hotel mapping out our Cuban adventure. Clearly, visiting Havana was a must as was a trip to the beach. However, what was perhaps most appealing to our crew was taking a road trip to the mountains of Viñales. 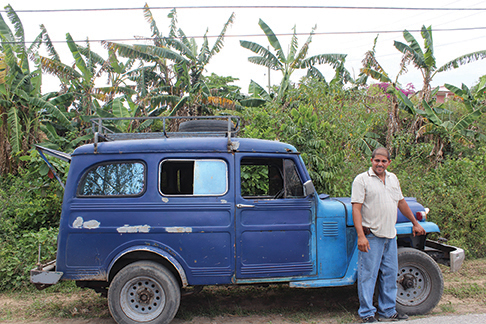 Transportation in Cuba can be procured in several different ways. Car rentals are available if you search well enough and the marina hotel offers tour trips; but you can’t walk far in Cuba without passing a vintage Ford with a taxi sign stuck to the roof. Our crew decided that being chauffeured around Cuba in a selection of classic cars was the way to go. So, with a trip to Viñales in mind, we got to know a few locals and kept an ear out for a taxi driver who would cut us the best deal. Asheton did some friendly haggling and found a ride to fit the bill. The cab driver agreed to meet back at our spot along the seawall in a few days and drive us the three hours to Viñales.

With almost a week before our big Viñales road trip, we set out to see everything within a “day-trip” distance of Marina Hemingway. We bargained with cab drivers in our broken Spanish and rode back and forth along the roads connecting Havana, Marina Hemingway, and the nearby tropical beaches. 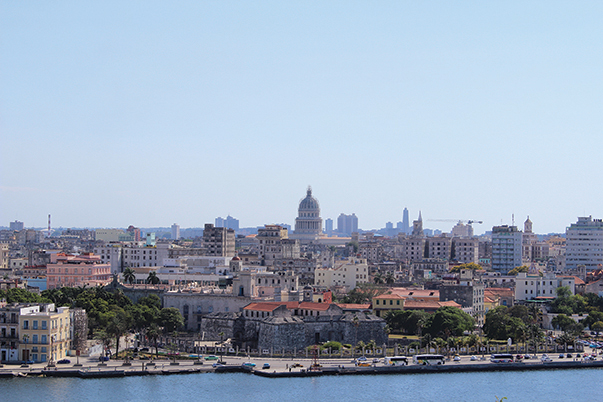 We found Havana to be a lively city with loads of culture. It is easy to see why Jimmy Buffett speaks so fondly of the place. Every inch of Havana is photogenic; you can’t help but look upward as you walk through rows of crumbling Spanish architecture, vibrant with Caribbean colors. The cobblestone streets are crowded with a mixture of tourists, street vendors, and neighborhood locals. We rode into the city at least three times during our stay in Cuba and, with each trip, we saw something new.

The historic sights are a big draw in Havana. Crowds of tourists joined us as we climbed the bell tower of Havana’s historic Cathedral de San Cristobal, which offers the best aerial views of the buzzing city streets. We made sure to visit the fort, Castillo De Los Tres Reyes Del Morro, and the statue of Jesus located high on a cliff, looking over Havana. There, we enjoyed a spectacular view of the entire city. A few cucs were even spent on a personal tour of Havana in two gorgeous, classic convertibles. Our drivers cruised down the city streets telling us every imaginable fact a visitor would want to know. Our hours spent roaming the streets of Havana were undoubtedly highlights of our expedition in Cuba. 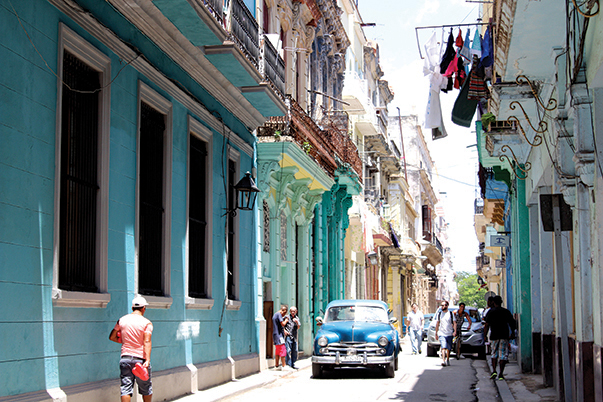 However, as we continued to explore; our group developed a long list of favorites. Within walking distance of Marina Hemingway, we found ourselves marveling at a neighborhood covered in the hodge-podge craftsmanship of a Cuban artist. One night we even taxied our way to Fabrica de Arte Cubano, a sort of nightclub-art gallery where modern art and the strums of live music fill the halls. Bartenders on every floor whipped up mojitos and cuba libres for the crowds of people who filed through the museum-like exhibit. After making sure we saw every corner of Fabrica de Arte Cubano, our crew caught a taxi back to our floating home. The next morning we would depart for Viñales. 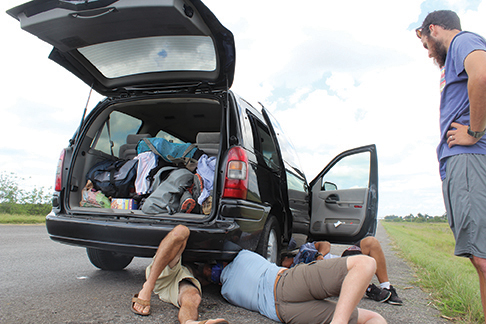 A large pothole put our taxicab on the side of the road halfway to Viñales. Our friends, Patrick and Kristen sacrificed some hammock straps and jerry-rigged the loose part back in place. Two breakdowns later, we finally arrived in Viñales. Like our taxi driver noted— “Ah Cuba”—it was all a part of the experience. Our time in Viñales proved well worth the struggle getting there. We stayed in one of the many “casa particulars” offered throughout the country. A sweet lady, named Xiomara, was our hostess and she cooked some of the best meals we had during our time in Cuba. She also proved to be a great trip advisor.

With her help, we were quickly checking off every activity on our list. We rode horses through the mountains of Vinales, toured coffee and tobacco farms, hiked through an incredible cave tucked in the side of a nearby mountain and, of course, ate at the Casa de Confianza. I could have remained in Viñales, eating 50-cent pizzas from the local street vendors for far more than three days. But, our visas were soon to expire so our crew of dear friends headed back to Soulmate, tied along the Marina Hemingway dock patiently awaiting our return. Our 10 days of roaming Cuba were drawing to an end. 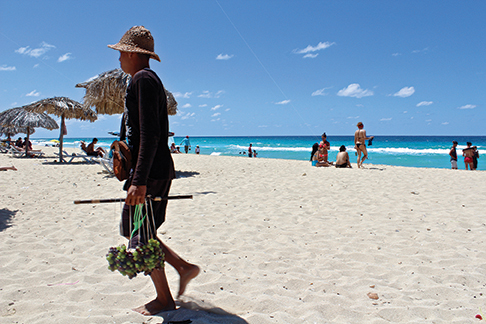 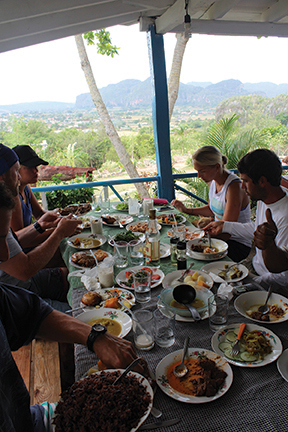 Cuba had been good to us. In fact, it had given us far greater experiences than we ever imagined. Of course, like every country, it struggles with its own internal battles but after roaming through the country and engaging with the people, we were all captivated by Cuba’s rich culture and gorgeous landscape. Departure would be bittersweet but with a clear weather window, expiring visas, and stomachs hungry for the variety in our American cuisine; we pointed Soulmate’s bow toward home. Cuba, and its people who we had grown to love, would be dearly missed. 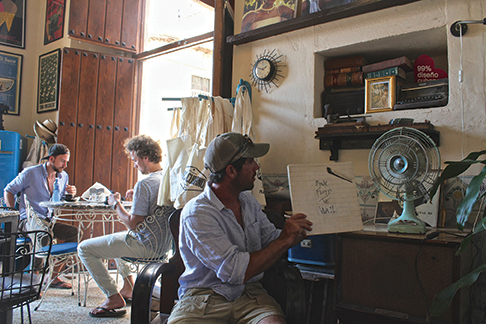 Grace Brookshire lives aboard and cruises with her husband, Joel.

View all posts by Grace Brookshire