The most harrowing disaster aboard a cruising vessel, short of sinking or fire, is loss of steerage. Cruising lore is full of stories of vessels losing rudders, or hydraulic steering pumps blowing out seals, or other mechanical failures leaving boats essentially “rudderless.”

When 41-foot Stella di Mare left Bora Bora for Penrhyn Atoll in August 2001, a strong northerly forced the vessel off track, so the crew turned downwind toward American Samoa. The 20- to 25-knot winds on the starboard quarter provided some lively broad reaching, but nothing dangerous.

“And then one night, all hell broke loose,” skipper Gene Meleski recalled. He noticed there was a serious problem with the limp steering, but he and fellow crew were too far in denial to accept the horrifying truth. Meleski donned his mask and snorkel and dove under the wildly pitching and rolling hull to find only a bare rudder post protruding aft of the skeg.

After a few days of experimentation with a Med-moor plank as a rudder, they followed a design in Gary Jobson’s book Storm Sailing, and constructed an emergency rudder from a closet door and controlled it with an ingenious system of doublebraid line, blocks and deck winches, permitting them to motor the last several hundred miles to Pago Pago Harbor in five days.

WINDVANE CONVERSIONS
Three of the best-selling servopendulum windvane systems offer conversion kits allowing an existing windvane installation to be converted to a rudder completely independent from the main steering.

Sailomat’s BEST (Blade Extension for Emergency Steering) is a wing-like foil designed to add an oar blade surface to the standard pendulum blade of the Sailomat 601 windvane system. The strong servo blade post stabilized by the BEST crossbar is strong enough to act as the BEST’s rudder post, allowing an otherwise unsteerable vessel to reach its next port.

The helmsman secures the BEST with a set of “locking lines” and steers the vessel with a special tiller included with the kit. The BEST rudder doubles the surface of the Sailomat 601 rudder and therefore provides adequate steerage for motoring and sailing.

When Hans Bernwall, founder of Scanmar International, builder of the Monitor servopendulum windvane, was asked about the initial stages of designing an emergency rudder for the Monitor, he recalled, “Our challenge was to be able to convert the Monitor aboard a 50-foot BOC boat, in the roaring forties, into a true emergency rudder.”

The result of his design staff’s toil was the MRUD, or Monitor Emergency Rudder, a large, stainless, high-lift NACA foil that the operator latches onto the Monitor’s standard servo blade. On the MRUD’s leading edge are four eyebolts, two on each side, where doublebraid lines are attached to keep the rudder vertically stationary.

The same type of connecting device found at the top of the servo blade shaft is located on the emergency rudderpost. Only Monitors built since 1991 can accept the MRUD assembly; previous versions must be retrofitted with a “strutguard” between the windvane’s two lateral legs. Installation of the MRUD requires the operator to affix a special brace to the strutguard in order to stabilize the Monitor’s upper pendulum shaft.

Cape Horn Marine has developed a spare emergency rudder that can be easily fitted to the existing Cape Horn Self steering unit. The 12 inch by 24 inch rudder is large enough to steer a normal cruising boat but not so large that the rudder puts too much strain onto the existing vane installation.  A small bracket with U-bolts is used to shore up the vertical and horizontal pieces of the vane.

The BEST, MRUD and Cape Horn emergency rudder function in similar manner—servoblade post stabilized with a short tiller to allow manual steering. If there is one drawback to this type of system, regardless of the manufacturer, it is the loss of self-steering.

Scanmar’s SOS Rudder should appeal to the boat owner who either does not have a windvane for easy conversion to an emergency rudder, or whose windvane for some reason does not readily lend itself for use as an auxiliary rudder.

Constructed entirely of 316L stainless steel, the SOS Rudder has a mounting tube structure custom designed to fit the individual vessel. The rudder is similar in shape to the MRUD, concentrating most of the effort to the top of the hydrofoil for less strain on the assembly. Totally self-contained, the package is complete with its own tiller and four mounting brackets, which are to be mounted permanently on the transom before the vessel leaves port.

The SOS Rudder is designed to steer boats up to 50 feet, though the foam-filled rudder and hardware ensemble weigh only 16 kilograms, or 35 pounds. You can store the SOS Rudder, along with its mounting tubes and other hardware, in its big orange bag, emblazoned with the letters “SOS.”

If you purchase this unit, allow for a space of 48 x 18 x 6 inches for storage. That may sound rather large, but let’s face it, any emergency rudder you carry on your boat is going to occupy a lot of space. In the event of loss of steerage, that large spare rudder will save not only your vessel, but conceivably your life as well. 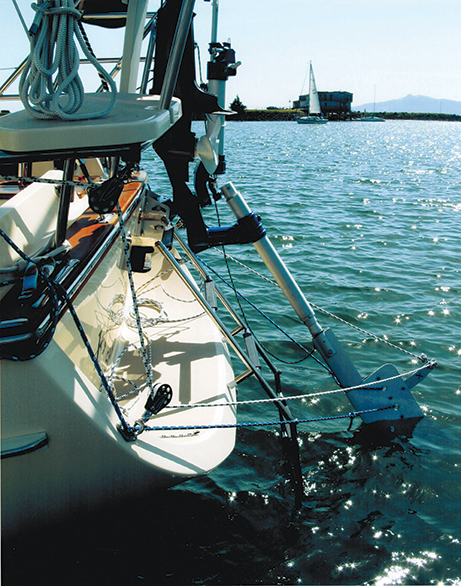 AUXILIARY RUDDERS
The best way to enjoy the dual advantages of a windvane self-steering system and an emergency rudder is to integrate both of them into a single unit. The still-popular but no longer manufactured Sailomat 3040 was the first fully self-contained servopendulum system to incorporate both a servo blade and a rudder into an auxiliary rudder system completely independent of the ship’s helm. In the event of main steerage loss, the operator attaches steering lines to the airvane, bypassing the servo blade to steer manually if needed.

The Fleming Global Auxiliary and the Windpilot Pacific Plus both use the “double-rudder” system found on the old Sailomat 3040 and are still being manufactured today. The main difference from the Sailomat, which uses patented “spherical-joint systems,” is Fleming’s and Windpilot’s standard bevel gears between the rudder blade shaft and the push rod leading from the airvane yoke.

Hydrovane builds an auxiliary rudder system so compact, at first sight it does not seem capable of steering from the lightest zephyr to the meanest navigable gale only by adjusting the ratio knob in its small control unit. But it does. The Hydrovane employs reduction linkage to convert impulses from a very large airvane into steering power without harnessing steering power from the water, as with servopendulums.

The unobtrusive profile of the Hydrovane, along with its ease of use, has made it popular on yachts ranging from 33 to 50 feet, which often have hydraulic wheel steering and center cockpits, precluding the use of a standard servopendulum.

Finally, Scanmar’s Auto-Helm trim tab auxiliary rudder is also a completely self-contained steering system, effective on open water but not well adapted for manual steering in the close quarters of a marina. The airvane mount could conceivably be fitted with a short tiller and control lines, but this would work only when moving forward, not in reverse. One great advantage of the Auto-Helm is its sensitivity in light airs; the rudder responds quickly and quietly to changes in wind direction and speed.

If you really want to save money, you can design and build your own emergency rudder. Remember, your rudder will hang from the transom several feet aft of the main rudder, so your creation will have the advantage of added leverage, requiring less surface area than the main rudder. Finish the project by installing permanent gudgeons on the transom to match the rudder’s pintles, and you will have saved yourself a small fortune.

Whatever your choice, you will sleep a lot better during your off-watch hours if you have a dependable emergency rudder or auxiliary rudder system ready for deployment before you leave port on your next ocean crossing.

Bill Morris completed a circumnavigation, two-thirds singlehanded, via the Suez and Panama canals aboard his 1966 Cal 30 Saltaire. His philosophy is to harness wind, sun, and muscle as much as possible to provide power for onboard systems. Bill is the author of The Windvane Self-Steering Handbook, published by International Marine.