Part II: Getting to one of the western Caribbean’s best hurricane holes  (published February 2014)

Still hoping that it wasn’t a huge mistake to take the boat up the Rio Dulce, we hauled anchor and started the engine, eager to put Livingston behind us. It wasn’t only the town’s costly scams and theft rate that left a bad taste in my mouth; an utter lack of wind made the anchorage oppressively hot. With that, I turned Hanalei hard to starboard and into the busy river.

As soon as we turned upriver, a breeze funneling down the gorge relieved the stifling heat. Roaring lanchas (small power boats) crisscrossed our path, jetting to the waterside enterprises of Livingston’s shoreline: restaurants, bars, a church and a hostel. On the south bank, tastefully groomed palm trees graced weekend homes complete with on-water garages for motorboats and jet skis. A fishing boat’s rotting hull rested high on the north bank, another reminder that the upcoming rainy season would send torrents of water downstream.

In June, the Sweet River felt languid. As we entered the peaceful, impossibly emerald waters of Rio Dulce National Park, the whole crew relaxed. In the distance a green canyon marked the curving route ahead.

We passed an eco-lodge, its thatch-topped palapa strung with guest hammocks, then a restaurant with an inviting dock, the kind of place you could dinghy over to for dinner if not hustling upriver to a safer anchorage.

Buildings dwindled to the occasional wood and palm-frond home or simply a path leading into the jungle from the water; boats became Cayucos (canoes). My normally chatty crew stopped talking, instead reaching for binoculars and cameras. Eyes accustomed to watching the horizon and depth meter instead swept up to gaze at a gorge increasingly thick with vegetation. After twenty minutes of silence, we rounded a bend to find scores of great egrets perched in the mangrove, silently observing our migration. Ears accustomed to gusting sails heard only the screech of an invisible bird or chirping of tree frogs.

Guides and blogs liked to say that early Tarzan movies were filmed on Rio Dulce. It was easy to see how that fiction took hold. Motoring upriver as dangling vines brushed the river’s surface made it feel movielike, mythical, yet as though some dramatic event was about to break the tranquility of the scene. 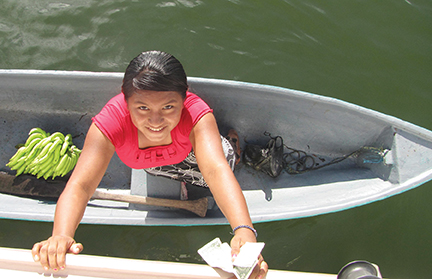 Even better than a movie was discovering the true drama that lay in the creatures and humans who made their homes here.

THE SWEET RIVER
From the vast no man’s land of the ocean, we were passing through the traditional home of the Mayans, being treated to glimpses of their modern lives. Schoolboys in white, polo shirt uniforms paddled by in cayucos, joking and laughing between canoes. Further on, a father was teaching his son to fish, spinning a fine mesh net out over the water like a lariat. Each person we passed shared a glance, a nod, a friendly acknowledgement between people of the water. The river was their home, where they belonged, yet we were welcome.

A high-pitched, crackly whine similar to the beginning of a violin class filled the air. As we drew closer to an inside bank, the cicadas’ warbling grew more insistent, escalating to the frequency of a poorly tuned SSB. We took it as a warning. The river began to shallow quickly where slower-flowing water deposited more silt.

“Stay in the center and favor the outside bend,” Sergei had told me back on Roatán, Honduras. “Except here.” He marked a couple of sandbars on my chart, where tributaries joined the Rio. “Then you go far around, near the inside.”

We passed one of the landmarks he described, where white limestone cliffs jutted out from cascades of green. The cliffs were said to contain five hundred years of sailors’ graffiti. I steered Hanalei around the sandbar until she reached thirty feet of depth, grateful once again for the helpfulness of fellow cruisers. 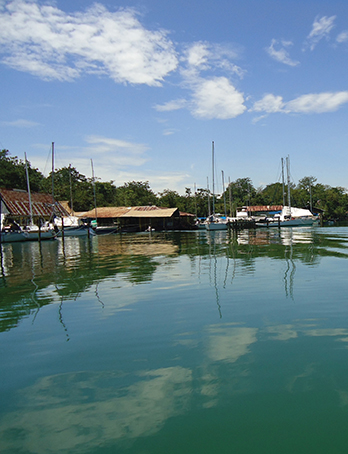 My cruising guide described a secret hot spring near El Golfete, the lake where we planned to break our trip, and advised how to locate it. The spring found us first, in the form of a large sign reading, Aguas Calientes, nailed to the rail of a bar above a convenient dock. A couple of hours earlier, I would have happily eased Hanalei to the dock and raced the crew to the spring, but it was already dusk. At the lake, we turned into Cayo Quemado (Texan Bay) to join three other anchored boats and sleep off the passage.

Birdsong awoke us. Outside, Hanalei appeared to be anchored in thick green mercury, the water was so still. Mist danced over the lake and onto the next cay as a canopied boat full of binocular-wielding birders nudged its shore. More kids paddled by on their way to school, waving and laughing. Two teen girls in bright cottons paddled over to sell us green bananas. After scrubbing thick mud off the anchor and rode, Hanalei joined a small flotilla for the last stretch of the journey, seven miles across the lake and another four to Fronteras. 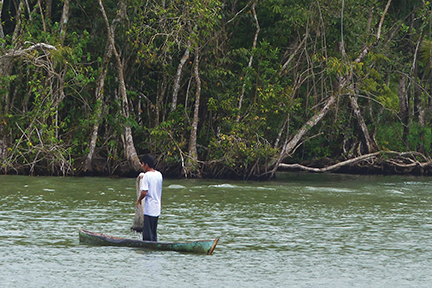 Lancha traffic picked up once we crossed the lake; gradually it was joined by motorboats, tour boats, water taxis, jet skis and even a Guatemalan Navy ship towing a crippled ferry. Finally, a bridge connecting the villages of Fronteras and El Relleno arched overhead, adding tuktuk horns, rumbling busses and downshifting cargo trucks to the sounds of life along the river. Below the bridge, women and backpackers washed clothes or stood in the river cooling off while children splashed around them.

Marinas seemed to line both sides of the shore. One by one the other boats peeled off as we continued on to our hurricane-season home, Marina Tortugal. 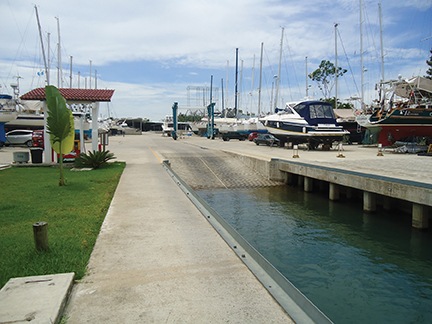 At the end of a passage, it was always a shock to re-acclimate to land life. Not only did it mean finding land legs, but talking to people, speaking Spanish again, learning my way around a new place, sizing up the marina staff and making sure that the boat was safe. After a season of dealing with ill-prepared dockhands, I was relieved to find quick, competent, helpful staff that caught and secured lines professionally. Water was abundant and free, with two spigots at each slip, one for washing and one for drinking. It kept getting better: hot showers, free Wi-Fi, regular shuttles into town, helpful staff, alert security, an excellent restaurant, nice neighbors, and, though they couldn’t do anything about the heat, a nice breeze came through every afternoon. What was not to like?

Next morning’s 7:30 radio net introduced me to the cruising community, a mix of year-round live-aboards, seasonal residents and various restaurants, service-providers and volunteer organizations. Announcements ranged from an orphanage’s bread-delivery boat to watercolor lessons to a cruiser-run veterinary clinic to basketball finals on the big screen.

The community seemed large, organized and friendly—to other cruisers, not to thieves. The conversation centered on theft during the months cruising boats first arrived, especially of loose objects on boats anchored in the river. People were reminded to leave on lights during the evening—the favored time for barefoot burglars in cayuco—when occupants were out. Helpful suggestions included a source for motion-sensor alarms and acquiring a dog.

The Rio wasn’t perfect, after all. I asked Tortugal’s manager, Manuel, about theft. He said they hadn’t experienced any. Two guards were on duty at all times with full view of all 46 slips. But close to town, where everyone provisioned, land-accessible marinas were more vulnerable.

In the years since my cruising guide’s initial publication, most of the dozen marinas it mentioned had changed hands. Another dozen had joined them, ranging from a six-slip, no-water spot for $100 per month to $400 for every possible amenity, including a huge swimming pool. With advance planning, a boat could choose a marina for its restaurant, seclusion, language spoken, happy hour, volleyball court, provisioning, eco-lodge or practically any other criteria.

At the slip next door, a couple of young men were expertly sanding and re-varnishing the boat. When I asked Manuel what other work could be done locally, he ticked off the specialties of a dozen mechanics and craftspeople: engines, electrical, welding, oil changes, stainless, woodwork, upholstery and canvas, sails, rigging, gel coat and all kinds of paint. Three operations did haul outs and a couple allowed do-it-yourself work. Most marinas let guests use their workshops.

He ran through a list of routine services Tortugal would provide during my absence, too, including monthly cleaning and airing-out and e-mailed reports on the status of any work being done.

When it was time to go, the caretaker assigned to Hanalei took reassuringly careful notes and asked knowledgeable questions about the engine, generator and batteries.

After all the anxiety of the sandbar and hassle in Livingston, the rewards of Rio Dulce definitely outweighed the risks. I took one last look at Hanalei, happily tucked in against whatever was coming, and climbed into the lancha to begin our land adventure. Sure that she was in good hands, I enjoyed the ride. 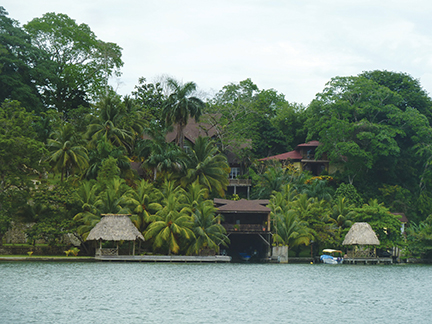