The sun glistened brilliantly off the Strait of Juan de Fuca as we sailed eastward through Race Rocks wing-and-wing and then turned north towards Victoria to close our circumnavigation of Vancouver Island. It was three months to the day and 1,141 nautical miles later, and after coming off the wild west coast of the island, motoring into the harbor was a feast for the senses— and induced a fair bit of uneasiness from the crew.

No matter how big or small, the end of a voyage can bring about a rollercoaster of unique emotions. For us, returning to full anchorages and boats sailing every which way was a dramatic change from three months spent in mostly solitary anchorages and an open ocean with few other white sails on the horizon. And though the anxiety it invoked was short lived, it was very real.

The type of wilderness we lived in while rounding the island simply isn’t found in many cruising destinations in North America, especially outside of Alaska or British Columbia, and the highs of experiencing it all were extremely dramatic. From sailing in mountain ranges that shot straight from sea level up six and seven thousand feet to communing with bears, eagles, wolves, sea lions and salmon instead of a steady stream of people left us with a vivid sense of awe and wonderment that has yet to wear off.

Even things as trivial as walking into a grocery store to buy food brought a flood of emotion. After mostly finding provisions at far away outposts with little to no fresh produce, seeing aisles upon aisles of options and food was somewhat confusing and a little overwhelming when trying to make a decision. Why are there so many of one single product anyway?

Also, going from places that are relatively close to boating services like mechanics, travel lifts and spare parts to the wilderness where those conveniences were many, many miles away forced us into a self-sufficiency that, had we not been prepared for it, could have caused a slight bit of trepidation. Fortunately, we were ready for the lack of services, food, water, power and for the rigors of ocean sailing, and in being so, we are now more content and confident doing without ready access to all of that in the future.

To have enjoyed a journey so rich in experiences as a family is something we’ll always learn from, no matter how far and wide our future adventures take us. The excitement involved in the dreaming and planning stages is fun, the joyful days spent immersed in the actual voyage are what we remember longest and the uncomfortable anxiety of finishing one journey before starting the next can be confusing. The range of emotions, though, is what makes the cruising life so authentic, interesting and always worth striving for. 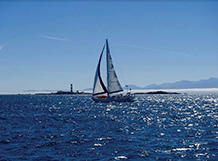