Warning: The only way to start this is with a dramatic, yet frightening reality.  “BOOM” isn’t exactly the noise it makes when it hits a crewmember. The sound is more akin to getting knocked in the head by a baseball bat. The noise is sickening and head wounds bleed—a lot—and we all know that blood all over a boat is not a pleasant sight. Fortunately, the few people that I’ve seen get hit with a boom have lived to tell about it. Unfortunately, many others are not so lucky.

Even if you are new to sailing, you can probably recognize the potential dangers associated with a boom flying across an open cockpit. We’ve all heard the horror stories and been warned about being knocked off a boat or taking a boom in the teeth. The boom is a major hazard during an uncontrolled or accidental gybe, but there are a host of other potential dangers as well.

The mainsheet can burn or strangle and the blocks attached to it are projectiles that you don’t want to get in the way of. Also, a natural reaction for newer sailors is to try and grab the boom to stop its movement. Wrists, elbows and shoulders are all in danger of being damaged if they get in the path of a flying boom.

Now that the scary part is out of the way, we can focus on how uncontrolled and accidental gybes happen, and what we can do to make the maneuver safe for your vessel and crew.

THE ANATOMY OF AN UNCONTROLLED OR ACCIDENTAL GYBE
Two critical factors play into the severity and danger of an accidental or uncontrolled gybe: the amount of mainsheet paid out and the velocity of the wind. If the mainsail is trimmed for a run when the accidental gybe happens, it has a larger area to swing and a greater ability to gain speed as it does so. And obviously, the stronger the wind, the harder the boom will fly across the cockpit.

An accidental gybe typically occurs when a boat is sailing on a run and the person at the helm steers the boat too low and “by-the-lee.” When the boat sails too far by-the-lee, the wind will end up on the same side as the mainsail and cause the sail to backfill—first aloft at the roach, then filling the entire sail. This is the point at which the boom and main swing across the cockpit. What makes an accidental gybe so dangerous is that the crew is not ready and may not have enough time to avoid the boom.

On the other hand, an uncontrolled gybe happens when the mainsail is not centered before the boat gybes and the boom is allowed to swing freely across the cockpit. In light wind that might be fine, but in a moderate to strong breeze you are inviting potential problems if you do not control the boom’s progress.

Accidental and uncontrolled gybes aren’t all about crew safety—you also need to think about your rig. While the rigging on most boats is strong and capable of taking great loads, the force on the rig exerted during an accidental or uncontrolled gybe can do a significant amount of damage. If the mainsheet is out all the way when the gybe happens, the boom could strike the shrouds, causing a potential rig failure. Also, the boom itself is in danger of breaking in half or at the gooseneck when the boom loads up. I’ve been aboard during a gooseneck failure and it is a very tough problem to remedy while at sea, especially without the proper tools and parts.

BOOM PREVENTERS
I am always amazed at the number of sailing courses that fail to teach students about boom preventers and brakes. Rigging a makeshift boom preventer should be taught in every basic keelboat course and is not very difficult or time consuming.

Rigging a boom preventer can be done in multiple ways. The easiest way to rig a makeshift preventer is to take a spare piece of line, tie it to the end of the boom, ease the main out to a broad reach or run, lead the line forward and cleat it taut at the bow. A dockline is acceptable to use in this situation—just make sure it is strong and that the knots will hold. I like this as an option on a bareboat charter or on a boat that doesn’t have a proper boom preventer already set up. Some booms have a designated place for a preventer line to be attached. If your boom does not, it is acceptable to tie it to an available bail. Once the preventer is made fast on both ends, tighten the mainsheet and boom vang and the boom will be held in place. This will keep the boom from bouncing around and will reduce chafe on your main from the spreaders and shrouds.

Another solid preventer—a slight variation on the one above—is led from the end of the boom forward to the deck, then back to the cockpit. For this setup you will need a long piece of line and a snatch block. Attach your snatch block at or near the bow on a toe-rail or to a padeye. Once your line is secured to the boom, lead it forward outside the shrouds and lifelines to the snatch block. If you don’t have a snatch block, you can also pass the line through the eye of a bow cleat. Now run the line back to a winch in the cockpit and you will be able to ease and trim it as needed.

A popular option with many cruisers is a mid-boom preventer. This is typically rigged in one of two ways. Fasten a line to a bail at the middle of the boom and then run it to a block that is attached at a padeye or to the toe-rail near the shrouds. From there you can run the line back to a cockpit winch or cleat. The other way to rig a mid-boom preventer is to use a pre-rigged block and tackle system that gets attached to the boom and then down to a padeye or to the toe-rail. This is especially easy to make if you already have a block and tackle-type boom vang that can double as a preventer. The nice thing about mid-boom preventers is that they are easy to rig and you don’t have to send a crewmember to the foredeck.

A potential problem with preventers that many sailors point to is in how the boat would react if the main did get backwinded with the preventer in place. The claim is that the boat would heel sharply to leeward, which would then make it difficult to steer. In light to moderate breezes most cruising boats can handle this quite easily—in heavy wind and swells it is important to ease the preventer quickly to help control the boat.

BOOM BRAKES
Unlike a preventer, which keeps the boom static, a boom brake is designed to slow the movement of the boom across the boat during a gybe by creating friction. A boom brake is a fixed set of rigging that typically starts at around $200. There are a number of boom brake products on the market today, such as Wichard’s Gyb’Easy (www.wichard.com), the Walder drum-type boom brake (www.boom-brake-walder.com) and the Dutchman Boom Brake (www.defender.com). Most commercial boom brakes are relatively easy to install and have very few moving parts.

Working in rigging, I frequently get the “preventer versus boom brake” question and it’s a hard one to answer because they truly are different animals. My typical answer is, “It depends.” When choosing between one and the other you need to think about what type of sailing you will be doing. A preventer is a great thing to set up if you are going to sail on one tack for an extended period of time, but if you plan on gybing often, then a boom brake might be the way to go. The reality is, you can have it both ways—a preventer is so simple to rig that you can set it up even if you already have a boom brake in place. 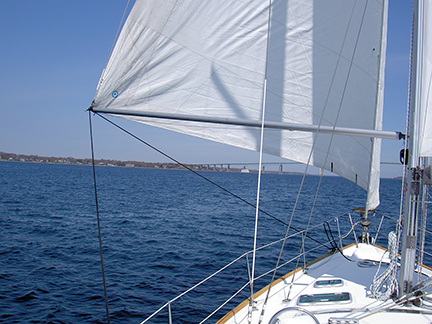 The bottom line when it comes to gybing is controlling the boom. The more you can limit the boom’s ability to travel, the safer your crew and vessel will be. If you have never rigged even a basic preventer before, try it at the dock first, then give it a practical test on the water by backwinding it on purpose. This will allow you to see how it works and get a feel for how the boat handles. After that, you’ll be amazed at the peace of mind you gain while sailing downwind.

Andrew Cross is a USCG licensed captain and US Sailing certified sailing and navigation instructor. After putting thousands of miles under his keel on the East Coast and in the Caribbean, he and his wife Jill now reside in Seattle on their Grand Soleil 39, Yahtzee. Catch more of Andrew’s expertise in each week’s edition of www.cruisingcompass.com.