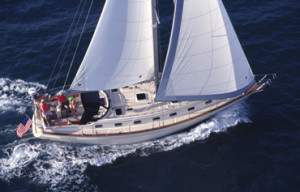 Island Packet 420 • Not long after Bob Johnson and his scrupulous team at Island Packet Yachts introduced the Island Packet 420 in 1999, BWS had the opportunity to sail aboard a brand-new one on a springtime romp from Norfolk, Va., across the Gulf Stream to Bermuda. It was one of those ideal boat-test situations of the sort that this magazine covets—650 miles of serious offshore sailing to a classic destination in the unpredictable North Atlantic aboard a vessel unquestionably designed for and suited to blue-water passagemaking. We weren’t disappointed in the passage or the vessel. In the October 2000 issue we wrote, “There’s nothing like falling off a wave at nine knots in the middle of the night to give you an idea of how well a boat is put together.”

What we found was a sturdy boat, solidly built, aboard which nothing broke, groaned, worked, leaked or shifted in conditions likely to coax any of those unwanted visitations out of less robust craft. The 420’s solid-laminate hull is laid up with tri-axial cloth under pressure; the interior furniture sits on a structural interior floor pan, while bulkheads are tabbed to the hull and deck; ballast in the keel is internal and enclosed, sealing the keel and creating what is in effect a second bottom in that area. Particularly impressive is how the chain plates are incorporated into the hull. Located outboard to enable a wide support base for the rig, they are fixed directly to the hull with a belt-and-suspender system of double welds embedded in fiberglass and reinforced with unidirectional glass and bi-axial glass run fanlike well down beyond the turn of the bilge. It’s bulletproof.

The design hardly jarred the Island Packet paradigm at the time, but it did represent the latest developmental step in a well-established line. We remarked, “The boat utilizes the Full Foil Keel thinking that Johnson has brought to bear in so many of his past designs. By configuring the long keel as a hydrodynamic foil more refined than a simple slab-sided section, the part is intended to develop lift as speed through the water increases, not unlike a modern-day fin…The net benefit is a hull design boasting less than five feet of draft (4’6” in the shoal option), able to be laid up as a one-piece molding, with an easy and forgiving motion in a seaway.”

Our stroll through the numbers uncovered “a boat moderate in all respects,” which is to say safe and forgiving in oceangoing conditions. On paper, the 420 is stiff and stable in a blow (B/D 40%). For a long-range, system-heavy cruiser with a lot of volume and payload-carrying ability, she commands an unexpectedly supple D/L mark of 257, well into the medium range for such a vessel. And in the horsepower department, SA/D at 18 indicates a good spread of canvas for developing speed in moderate air, but not so much as to put the spreaders in the water when the breeze pipes up; as we noted, “Certainly our positive Gulf Stream experience with a full main and staysail in 22 to 30 knots of wind speaks to this.”
We summed it all up by observing that “one of the satisfying things about the IP 420—and the rest of the Island Packet line, for that matter—is that the boats are pure cruising craft, not designed to be all things to all people.” The passage to Bermuda featured sustained close-reaching speeds of eight to nine knots in the breezy going just described, with good response at the helm and a solid bearing through the water. The 420, we suggested, “is strong in the straight-on cruising realm of sailing: large tanks, comfortable motion, easy to sail alone or as a couple, durable, forgiving in rough seas, a great galley and a trustworthy design concept.”