We were finally ready to leave Hong Kong on the Kraken 66 flagship White Dragon’s 18,000-mile voyage to Gibraltar. We were a couple of days later than intended, but that’s how it normally goes when getting everything done before departure.

It’s been a frantic few days as we filled all of White Dragon’s storage spaces with food and drink plus all the paraphernalia one needs to be self-sufficient for an extended period at sea. Spares, filters, oils, sprays, glues, tapes, fishing tackle, dive gear, hoses, pipes and every conceivable tool we might need have now been stowed away for the first leg of the trip. And we have provisioned up with special items that we may not be able to find easily on our voyage. Steve and Jack kindly brought a huge pack of 1000 PG Tips tea bags out from the U.K., so a good cup of tea will be assured for a good while! 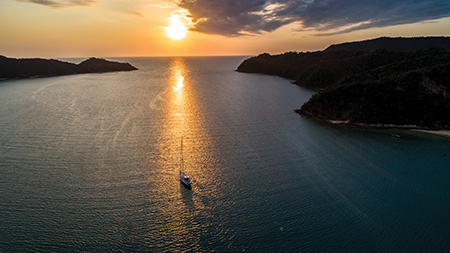 We waved goodbye to the Kraken Yachts team of Roger, Sasha, Carrie, Raymond and Filip on the fueling dock at Gold Coast Yacht Club and headed out towards the South China Sea and the open ocean. White Dragon’s crew of Clive, Steve, Jack, Mike and I busied ourselves stowing the fenders and mooring lines and securing everything below decks as we sailed through Hong Kong’s spectacular Victoria Harbour.

Our first leg was Hong Kong to Subic in the Philippines. This is a 576-mile passage and should take us three days. The weather GRIB files were showing perfect 17-to-20 knot southeast winds for the first two days but this stretch of the South China Sea is notorious for testing fresh crews with stronger winds than forecast. So, no one was surprised when the wind built to 25 knots during the first few hours then steadily increased to 30-to-35 knots on the beam. We reefed down for the first night but still made 8 knots through 10-foot seas. White Dragon, older sister of the Kraken 50, was in her element as she stretched her legs and reveled in the conditions.

THE FIRST NIGHT & LANDFALL SUBIC
The first night was uneventful as the crewmembers found their sea legs and we settled into our watch system. With five crew we run rolling watches. The first crew had two hours on helm full watch. Then as the next crew comes on watch the first watch crew becomes standby watch for two hours in the cockpit. As the second watch crew is relieved at the helm the first watch crew then goes below off-watch. I think this is an excellent system because off-watch crew rarely gets woken for sail changes since there are always two crew in the cockpit at any time. Once off-watch, each crew member has six hours in his bunk if needed.

We had prepared pre-cooked meals before leaving Hong Kong so no one needed to spend much time in the galley in the first few days. The wind stayed on the beam at 30 knots and we were running at 8 to 9 knots.

As we sailed into the lee of Luzon, The Philippines, the dawn broke and the wind began to ease slowly. By midday we had 18-to-25 knots slightly aft of the beam and the wave height had gone down to six feet. Since we only had 50 miles to go, I decided to keep sailing at top speed aiming so we could anchor for the night in a beautiful bay just outside Subic Bay. White Dragon performed beautifully, exactly how any luxury sailing yacht should do. We used the invaluable forward sonar to con our way safely in and dropped anchor in 60 feet on a sandy seabed at 2200 hours. 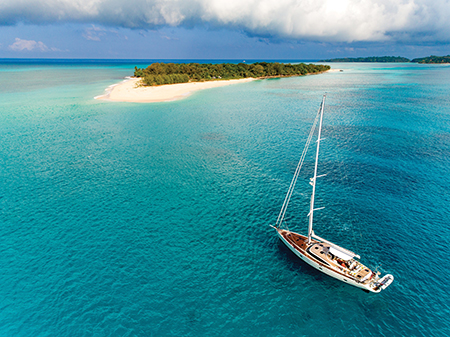 We awoke early to weigh anchor at 0700 hours for the short run round into Subic Bay and tied up at Subic Bay Yacht Club at 1000 hours. White Dragon had exceeded our best expectations and maintained just under 9 knots for the duration of the trip. She had coped beautifully with quite big seas coming dead across the beam and she maintained a very steady motion the whole way. All in all, it was an excellent passage for the first leg of our big trip.

We stayed a few days in Subic adding more provisions and going out to dive on the wreck of the SS New York. We normally dive directly from White Dragon but were not permitted to do so on the wrecks in Subic without a licensed dive guide.

SUBIC TO CORON
We left Subic at midday to sail 140 miles overnight to Coron. Then, to liven things up a bit, just as we were about to set the sails at the mouth of Subic Bay, the port side trolling reel screamed out. Jack duly landed a 25-pound Spanish mackerel, which is one of the tastiest game fish in the sea!

We picked up a 15 knot southerly wind and cracked on again averaging 8 knots for the trip. As we approached Coron, the wind increased to 20-to-25 knots and shifted to ESE. Coron is a great area to cruise and dive because there’s always good shelter, many safe anchorages and almost year-round good winds to sail by. Coron is an interesting small town and diving tourism means there are plenty of good bars and restaurants. La Sirena is our favorite. It is located on the seafront in the west town anchorage and is an excellent place to eat great Filipino food or kick back and relax with a sundowner.

All the crew on White Dragon are avid wreck divers. So, the wrecks of the Japanese auxiliary fleet in Coron Bay were high on our target list. Thanks to great visibility of 60-feet plus, they didn’t disappoint. These wrecks are not where they are shown on the chart. But, luckily, I had visited here 10 years before on my previous boat Moonshadow and had kept the GPS positions for the best wrecks. So, all went well. We dived on five of the wrecks during our three-day stop in Coron.

CORON TO PRINCESA
We needed to leave Coron a day early. Despite being assured by Customs and Immigration at Subic that we could clear out of the Philippines at Coron, there is in fact no customs and mmigration office there. So, we had to change our plan. Instead of sailing from Coron to Kota Kinabalu, Borneo, Malaysia, we had to divert down the east coast of Palawan to clear out at Puerto Princesa. White Dragon’s bimini gives much needed shade under a tropical sun; another aspect of great yacht design. 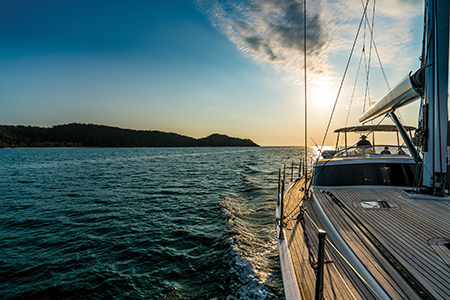 The passage was 270 miles. Despite a forecast of very light winds after the Coron area, we had a great sail all the way, again averaging 8 knots for the passage. We stopped at a reef 40 miles from Puerto Princesa to dive and were treated to a fantastic aerial display by a feeding thresher shark. It jumped 10 feet clear of the water before crashing back into the sea, slapping its tail on the surface to stun its prey. The shark jumped several times only 50 feet from the yacht, but, unfortunately, we didn’t get to see it underwater.

We continued on after the dive and sailed right into Puerto Princesa Bay, heading over to the quaint and friendly Puerto Princesa Yacht Club. The yachties there directed us to customs and immigration and we rode into town on one of the thousands of motorized tricycles. This is not the most comfortable mode of transport, but it’s certainly one of the most economical! Our trike driver took us to town and drove us around then back to the yacht club. The three hours cost 360 pesos (just over $4) for two people!

After clearing customs, we set sail from Puerto Princesa with a great 16 knot breeze on our beam, heading for Kota Kinabalu. Malaysia, here we come. 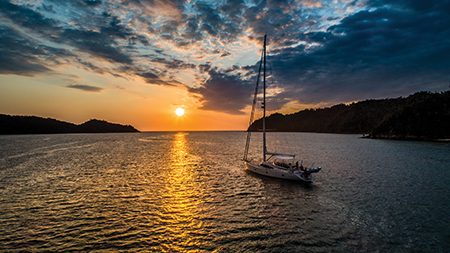 View all posts by Dick Beaumont