A short stop in Guadeloupe provides many rewards  (published August 2013)

While making the passage north from Dominica to Antigua for the Classic Yacht Regatta on Sinbad, we took the easy way and decided to stop in Les Saintes and then in Deshaies (pronounced “Day-ay”) on the northwest coast of Guadeloupe. We glided into the bay in the mid afternoon and dropped anchor fairly close to the steep cliffs. After settling in, we decided to go ashore to scout the town. Our plans came to a screeching halt, however, when we noticed other cruisers in the harbor snorkeling with a pod of dolphins.  We took one look at each other and quickly scrambled for our snorkel gear. 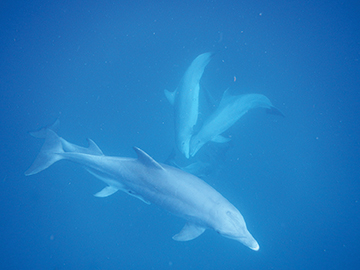 Diving off the boat, we hurried to join the fun. The dolphins had come into the bay to enjoy the rites of spring, and they twirled and dove gently in tandem. Two large males occasionally passed close to us and looked us over to make sure we meant no harm. Many times the dolphins would pass within just four or five feet of us. With their perpetual smiles and curious glances, we were spellbound and stayed with them until they decided to move on.
After this magical interlude, we continued into town. The dinghy dock is now repaired, so cruisers no longer need to go up the Deshaies River to tie up, which was an aggravation to the local fishermen. The village is charming and laid back with quaint old buildings that hug the shore. It is a place the local Guadeloupe French like to visit on the weekends. I browsed the boutiques and Randy checked out the restaurant menu boards before retiring early to Sinbad for dinner and a good night’s rest. The day held one last surprise though and we watched the sun sink below the horizon with a blaze of neon green light—a spectacular green flash.

The morning dawned to scattered showers, but the clouds made it a great day to walk, saving us from sunburns and keeping us cool. We walked south from the dinghy dock to the north bank of the Deshaies River and turned inland. We followed a paved road, which quickly became a paved two-track and then a path, winding along the river’s rocky bank. A little further on is a small pool; a wide and deep spot in the river where you can pick your way down for a cool dip. We went further, hopping from stone to stone across the river and back over algae-covered boulders. Clambering slowly upstream, the rocks become treacherously slippery from the rain. At last we came to a second pool, with small cascades coursing between massive boulders on both sides of the river. We had hoped to continue on, but the slippery footing made it too hazardous. So we peeled out of our clothes and descended into the pool of lovely cool water, washing our cares and muddy smears away.

Refreshed, we returned to the main road and followed it south up a steep hill to the Botanical Garden. This garden deserves its fine reputation. After entering the park, a path leads past serene koi ponds with flowering blue and pink lotus amid their glossy green pads. Tall native trees host many varieties of orchid and ferns, and the tropical bushes were full of spring blossoms. Red and yellow Heliconia grew in shady stands, neighbor to giant-leafed monstera vines, scarlet ginger blossoms and indigenous begonias. The garden is landscaped to provide an intimate feeling in a compact space, and though there were many people in attendance, the curved paths and luxuriant growth made it easy to appreciate the lush stillness and echoing birdsong. There is also a restaurant built atop a manmade waterfall, providing the rush and trickle of water, and an aviary with colorful Caribbean lorikeets and giant macaws adds personality.

After enjoying minty mojitos in the café overlooking the garden, we walked back down the main road and took a left turn to the Batterie peninsula hoping for a view of the harbor in the golden afternoon light.  Down the hill we went, until we reached Hemingway’s, a restaurant facility with fantastic vistas. The business was closed, but we sat in the shade overlooking the bay and savored glasses of our own Cote du Rhone, which we had packed along in hopes of such a rest stop. 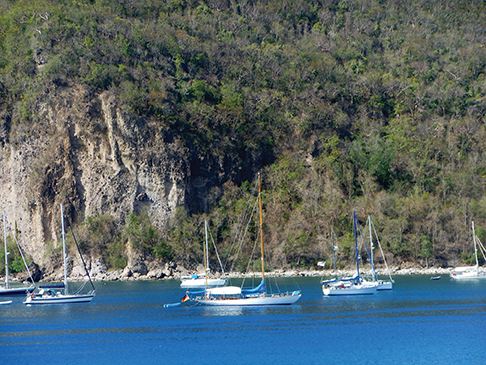 By this time it was late in the afternoon and we came upon a booth selling homemade sweet and savory coconut balls and accras de morue, tasty codfish fritters that are particularly good in the French islands.  We bought accras, scooped up some green piquant salsa to go with, and nibbled them in the shade of a building before climbing in the dinghy and heading back to Sinbad.  Both of us were dead tired and a little footsore, but we felt great satisfaction that we had used our lay-day well and had explored Deshaies to the fullest.