In Coasting, Jonathan Raban makes a distinction between continental people and island people. For most of us, the continental people, the shore is an endpoint, a geographic border past which we do not look for opportunity or inspiration. But for islanders, the shore is the beginning, a gateway to everything, the sea a path to places they want to go.

I think this fundamental attitude difference is most apparent to voyaging yachts making port. When we pull into an island port, the people, along with their infrastructure and economy, face outward, accommodating and understanding. At their core, island cities need the sea, rely on the boats and respect the sailor.

Victoria is no exception. She’s a city tucked into the southern end of Canada’s 290-mile-long Vancouver Island. Her downtown wraps around the splendid inner harbor from which she sprung more than 150 years ago. Today that harbor remains the hub of this cosmopolitan metropolis, the provincial capital for British Columbia. More than 300,000 people live here and in the collected suburbs, but it feels tight-knit, friendly and creative. A burgeoning IT industry and the 20,000 students who attend the University of Victoria compliment the city, adding a bustle and vibe that remain after the tourists retreat for the winter.

Entering the outer harbor, a buoy advises mariners to keep right, to avoid the channel that is a runway for floatplane traffic. After following a half-mile-long string of yellow buoys past floating homes and grass-filled parks, transient moorage is front-and-center, framed by a granite causeway with both the historic Empress Hotel and Parliament Building forming a stately backdrop. Thousands of blooming annuals spell out “Welcome to Victoria” on a green-grass slope. 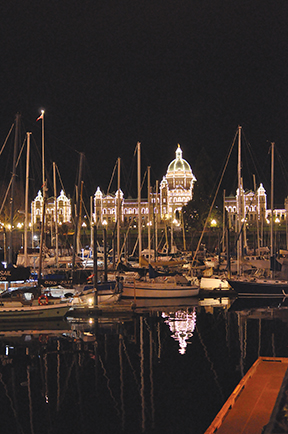 Victoria is a tourist mecca, but refined to the point that the horse drawn carriages and wrought-iron streetlamps blend in to the streetscape without a hint of tackiness. Union Jacks, magnificent gardens and British-styled pubs are reminders of the city’s Anglo influence.

During our visit, we enjoyed afternoon tea at the Empress Hotel, spent hours wandering the Royal British Columbia History Museum and were inspired by an IMAX film. Butchart Gardens, one of the city’s biggest tourist draws, is only a 45-minute bus ride from downtown. Our younger crew loved the petting zoo at Beacon Hill park (where peacocks wander freely), the Victoria Bug Zoo, and Miniature World, all within a very short walk of the docks.

Restaurants serve everything from wholesome baked goods to Persian to Vietnamese to Italian. On a pier between the Wharf Street docks and the sea plane terminal is a former shipping container turned into a magnet for fish-and-chips lovers. Red Fish/Blue Fish is a Victoria institution open only for lunch. But make time because a thirty-minute wait at the take-out window is normal—and very worth it.

Moorage is cheapest during the cooler, wet months between October and May, but the dry and temperate—even hot—summer weather attracts many more boaters between June and September.

Raban may have been right about island people looking at the sea as a path to something more, but after spending time in Victoria, we continental people weren’t left wanting for much more.

View all posts by Michael Robertson