The Caribbean is the world’s most popular place to charter a sailboat and among the many islands, the British Virgin Islands are home to the vast majority of the boats and the largest crowds of charter parties.

Caribbean charter companies are busy all year long with charter groups from North America and Europe. To make the most of supply and demand for their boats, charter companies split the year into four distinct seasons: peak, shoulder, mid and offseason, each with its own price structure.

Obviously, the peak weeks are when families have vacation time and when winter-bound sailors are yearning to get away from snow and ice. These weeks create the most demand and so support the highest charter prices of the year. Move your schedule to the shoulder and mid weeks and you can save a bundle on the cost of your charter or perhaps earn extra days of sailing for free.

Airfares to the Caribbean account for a significant portion of the vacation cost; so finding the best deals will help you make a cruise in a Caribbean paradise more accessible. 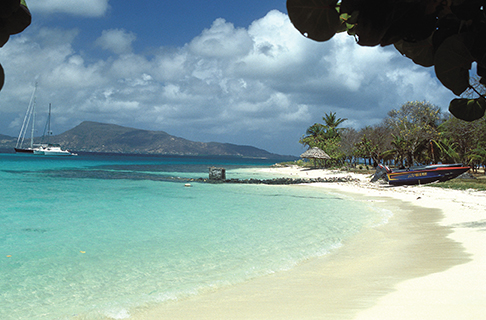 Charlie Carey who founded The Moorings did a lot to create and build the modern bareboat charter business as we know it today. He once noted that running a charter fleet was similar to running a hotel or resort, you needed to fill beds to have the business make sense. So, like hotels, there are deals out there to be had to fill boat bunks, but not all of the charter companies extend them in the same way.

The largest charter company in the world is Tui Marine, parent company of The Moorings, Sunsail and Footloose, which have bases throughout the Caribbean and around the world. The Moorings and Sunsail are the premium brands while Footloose is their discount brand that has a fleet of older boats, many of which have run their four-year course with the other two brands. 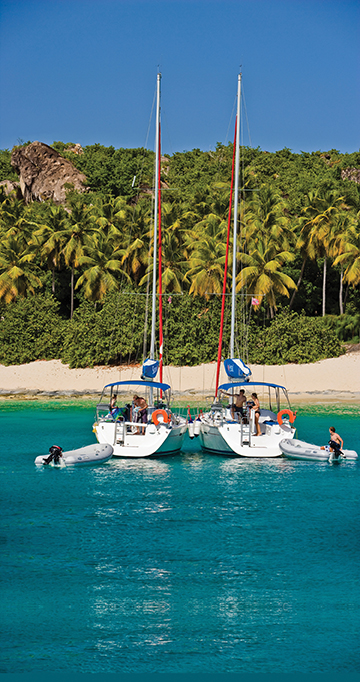 The Moorings and Sunsail break their year in the Caribbean to the peak season that runs from December 18 through April 18, and the shoulder season that runs through the spring, summer and fall; with discounts through the shoulder seasons. As premium brands, the pricing with these two companies tends to be near the comparative top while the service and value they deliver is known for its consistent quality. 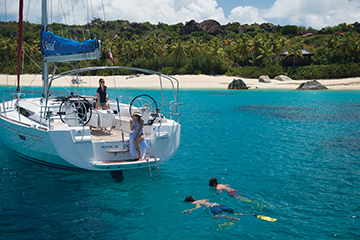 Footloose on the other hand is out to provide as low cost chartering as they can and has a policy that they will beat any price of comparable boats in any other fleet by $100. So, in a sense, you get what you pay for with Tui Marine, all the while knowing you have the strength of a very large company behind you when you set sail.

TMM, which has bases in the BVI, St. Vincent and the Grenadines, and Belize, is a smaller owner operated company that is more flexible than the bigger guys. Their peak rates are the last two weeks of December and then the months of February, March and the first half of April. But, if you can get away during the month of January, you can get at least 10% off the peak rates. Also, repeat customers earn a 10% discount on their charters. And if you like the Caribbean in the spring and fall, as we do, then you can earn even better discounts, particularly on long term charters. In the Grenadines, TMM is offering last minute discounts this winter. If you book the charter less than four weeks from the charter date, you can get as much as 25% off the charter price. And, longer charters will increase the weekly discounts. So it can really pay to procrastinate.

Horizon Yacht Charters has bases in Tortola, St. Martin, Antigua and Grenada, so you have your choice of the whole eastern Caribbean to explore. They have fleets of Bavarias and Fountaine Pajot cats in all sizes. Horizon regularly announces specials on their website and you will find that strategic planning and careful attention to the website will land you the best deals. If you want to explore the islands in the middle of the eastern Caribbean chain—Nevis, St. Kitts, Saba, St. Barts and St. Martin, Horizon will be able to put together some fun one-way charters that will get you off the beaten track.

Conch Charters, based near the entrance of Road Harbor, Tortola, has a large fleet of monohulls and multihulls. Another owner operated company that is known for their personal service, Conch offers several ways to get the most from your charter budget. They interrupt the winter peak season by offering nine days for the price of seven in the week between January 6 and January 31, again from May 1 to July 25 and from November 8 through December 16. From July 26 to November 7 you get 10 days for the price of seven.

For those who want to charter in the U.S. Virgins and fancy sailing an Island Packet, Island Yachts, another owner operated company, has pioneered extended-day bonuses for those who charter in off peak weeks. They are particularly generous in the early new year when you can charter a boat for 10 days but pay for only seven between January 5 and February 5. And they have shortened the winter peak season so that the off-peak rates kick in on April 1 instead of mid April and that whole season right up until just before Christmas you can get 10 days for the price of seven. Island Yachts is on St. Thomas so there are direct flights from many North America cities. Plus, you don’t need a passport to fly there. 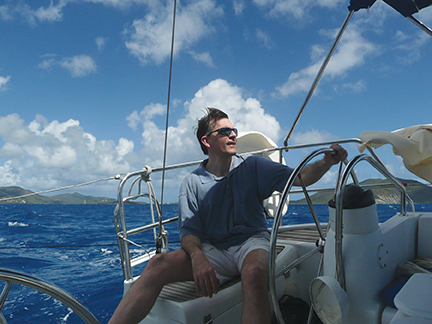 Dream Yacht Charters has bases all over the world and in some of the most exotic chartering spots imaginable. How about the Seychelles or Madagascar? Or Malaysia and Thailand? They also have several bases closer to home in the Caribbean. The big news from Dream Yacht Charters is the new base the company is opening in Ft. Lauderdale this fall, with a fleet that comprises monohulls from 33 to 50 feet and multihulls from 40 to 48 feet. To celebrate the grand opening, Dream is offering a 20% discount on all charters booked between November 31, 2013 and April 15, 2014. From Ft. Lauderdale you can cruise down to the Florida Keys or jump across the Gulf Stream to the Bahamas, only 60 miles away.
MarineMax in Tortola is the newest major player in the Caribbean Charter trade with a new base and a new fleet of sail and powerboats. The group jumped into the fray with several new Dufour 43 sloops and two cruising power cats at 38 and 48 feet. MarineMax is primarily a powerboat retail company with dealerships all over America. So, their emphasis is more on powerboats than sailboats. The Dufours are great sailboats and there are deals to be had when you speak to the MarineMax agents. But, if you want to try power cat cruising, these guys can show you a good time. For sailors, that might sound like going to the dark side, but remember, what happens in Tortola, stays in Tortola.

AIRFARE STRATEGIES
Finding deals on airfares is getting more difficult. Prices seem to be rising daily and discounts are few and far between. Like the charter companies, airlines have peak and off peak rates, so you will find that choosing the weeks you fly and then the days of the week to actually get into the air can make significant differences.

Obviously, flying around school holidays and the big national holidays in mid winter will always be more expensive than in the less traveled weeks. So, in general, January will tend to be cheaper than February and March, and the end of April will be cheaper than the first two weeks of the month. The weeks between Thanksgiving and the start of the peak season before Christmas are often great times to fly and to charter.

The day of the week you choose to fly will also affect the ticket price, with Tuesday and Wednesday usually offering the best prices round trip. That may mean that you will want to try to book a midweek charter to fit your lower priced flights. Tuesday is the day airlines adjust their fares for the week so it is often the best day to book tickets.

Often, direct flights to the Caribbean will be easier and less expensive than flights that change in Miami or San Juan. Also, your bags have a better chance of joining you on your charter vacation with a direct flight. St. Thomas has many direct flights from North America so if you are sailing with Island Yachts you will be there as soon as possible. For those sailing in the BVI, if you can arrive before the end of the afternoon, you can catch a fast ferry to Tortola and be on your charter boat by evening.

St. Martin has many direct flights from North America so staging your charter from there will minimize your time in the air and inconvenience. Also, flights in and out of St. Martin tend to have more moderate prices because of the sheer volume of traffic and the number of carriers servicing the island.

As you get farther down island, nonstop flights become less frequent and convenient. Often you will have to change in either San Juan or St. Martin to a smaller jet or turboprop plane for the final leg to Antigua, St.Vincent or Grenada.

Using points to book tickets may be possible although finding the days and routes you want will be a challenge and there will be many blacked out dates during the winter. But, you can get some great deals if you are flexible with your travel times and don’t mind staying in a hotel between flights. 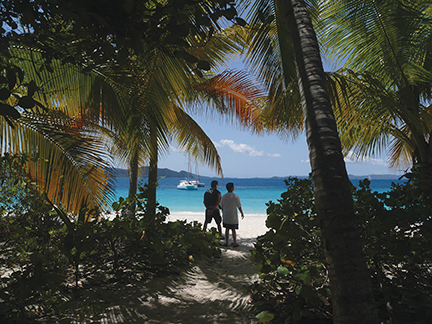 With some research and planning and with some luck with airfares, a charter vacation in the warmth of the Caribbean is one of those sailing experiences that all cruisers should enjoy from time to time. Whether you are going on a bareboat charter for the first time or the 25th, finding the best deals to suit your style and budget will make it all the more fun.