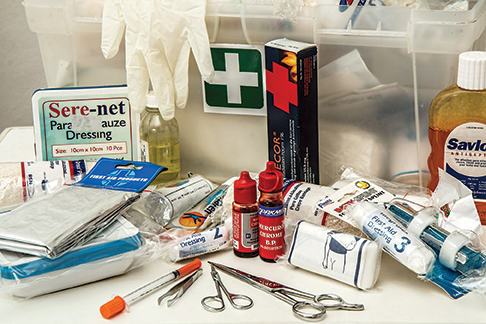 Six months before we were scheduled to take Moondance across the North Atlantic, we began to assign tasks and areas of responsibility to the people scheduled to be onboard. Those responsible for the engine maintenance and other mechanical equipment would have time to take classes in diesel mechanics, collect and review manuals and understand the day to day processes that would be required for the watermaker, engine, generator and other pieces of equipment. The person who was going to be responsible for sail repairs, would have time to build a proper offshore sail repair kit and learn how to best use the various sticky-backed materials, high-tensile lines, and needle and thread. If someone was severely burned, seasick for days or got a cut infected or blood poisoning while handling diesel fuel, it might be far more critical to have someone understand the bits and pieces stowed in the medical kit and how to properly close a wound or otherwise help the afflicted. It would certainly NOT be the time to start fumbling for solutions.

Racing around the world in the 1998-’99 Around Alone Race, single handed Russian sailor Viktor Yazykov had a potentially life-threatening situation facing him. The abscess on his elbow required draining. Even to a former Russian paratrooper, it was painful, and a resulting infection could kill him. Lancing the abscess would be excruciating. He drank some vodka to dull the pain. Perhaps that wouldn’t be enough, he thought. He took some aspirin.  Then he proceeded to lance that abscess.  It wasn’t a good situation, as he sat on the cabin sole watching his arm bleed continuously.  With the blood beginning to form a lake in the bottom of the little boat, he passed out, now facing the prospect of potentially bleeding to death.

While I felt a great deal of sympathy for the solo sailor, even to a non-medical person with a minimal amount of first aid training, his approach seemed to miss a few important considerations. Alcohol is a vasodilator. The blood vessels will all be opened up. Aspirin is a blood thinner.  The blood will flow through the widened blood vessels like a torrent.  And as he passed out, his arm wasn’t even elevated to use gravity to slow the flowing blood.  As a former U.S. Marine, I was left to wonder what kind of first aid training was provided to the Russian military. 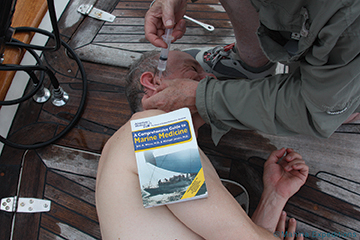 The medical kits that are available to wilderness travelers and offshore sailors are fantastic. In some cases, they provide extensive equipment for a wide variety of medical emergencies—everything from toothaches to broken limbs. They are not, however all-inclusive.  Even the ones that contain medical books and are organized in a thoroughly logical way lack something very important. Medical kits don’t all come with knowledgeable training. There are, however ways to at least partially remedy that.  Courses are offered in wilderness first aide training. (See: www.nols.edu/wmi/courses/wildfirstaid.shtml among others.) In most cases, first aid is meant to temporarily patch people up long enough to get them to qualified medical attention. In the wilderness, that time might be quite lengthy, and the middle of the ocean is as much wilderness as anywhere on the planet.

Of course there are alternative means of getting medical help. Viktor Yazykov was fortunate enough to be able to contact a physician by phone. Whether you’re using a satellite communications phone or SSB, it’s possible to patch through to a doctor and get remote advice. (See: www.telemedicine.com/directory/resources.html for a partial list).  When Rich Wilson and I did a doublehanded speed record from New York to Melbourne, Australia, we attended a refresher class with a doctor in Boston who was later available by phone if an emergency presented itself. The availability of medical advice by phone, doesn’t absolve one of the responsibilities of being self-reliant, however. Planning ahead and having someone onboard dedicated, trained and equipped for medical emergencies is certainly a huge step in the right direction.  Even that has its limitations in some cases.

During the 1993-94’ Whitbread ‘Round the World Race, our doctor onboard “Winston” was a French bowman.  During a couple of maneuvers, he was alternately slammed into the boom vang and then later banged his forehead on the spinnaker pole during a spinnaker peel. He wasn’t having a very good day.  At 4:30 a.m., his forehead required stitching, so his backup, a young New Zealander, had to do the stitching.  Confronting the situation with both focus and good humor, they got through the minor emergency.  But the fact that it could have been far more serious wasn’t lost on us. Even the boat’s “doctor” sometimes gets sick. Plan your backups. 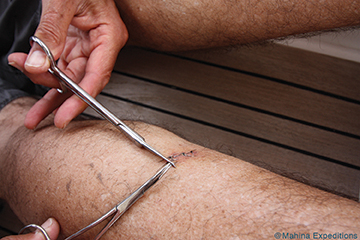 Whether you’re getting ready for a transatlantic crossing or a day sail on the bay, I think it’s a good idea to have two separate first aid kits. One kit is the “major kit” in which you can find equipment to help in almost any situation to be expected from broken bones to major burns. (See: www.lrse.com/Medical/) For long trips you should also be prepared for things like appendicitis, enabling treatment with extensive antibiotics. Epi pens may save someone’s life if suddenly you find out that one of the crew is allergic to bee stings or peanuts. It’s a simple enough solution, but if you don’t have it or it’s not handy, tragedy may result.  The “major first aid kit” is kept in a secure location which everyone knows but only the responsible medical person on the crew accesses.

The other first aid kit is the “minor kit”.  That is the kit that has bandaids, seasickness medicine, small burn ointment, suntan lotion, aspirin, antibiotic cream and a few other commonly used treatments. It’s kept in the head or some other place that’s convenient for everyone and can be quickly accessed.  Additionally, a third kit should be kept in the emergency grab bag. If you had five minutes to get off a burning, sinking vessel, you may not have time to get the comprehensive medical kit.  You may be lucky to get the grab bag, satellite phone and a few extra bottles of water. Make sure the grab bag is well-stocked with things you might very well need, and you might want to augment the minimal first aid kit that is already a part of the supplies permanently packed and stowed in the liferaft.

Even a well thought out and comprehensive medical kit needs to be augmented for long passages. If members of the crew take regular medications, some of those medications should be put in the grab bag as well as other locations for emergency use—perhaps even in the liferaft.  Passages get delayed or diverted from time to time, and planning ahead for those situations can help to avoid a cascading set of problems—some of which might be medical. Whether it’s blood pressure medication, blood thinners, migraine medication or other pharmaceuticals make sure they’re handy in case of an emergency. Similarly, for long passages, you may need extra painkillers or antibiotics. 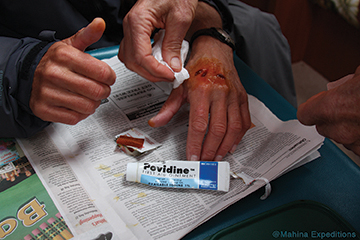 During one ‘round the world race we had one crewmember dislocate his shoulder and another break his arm. The dislocation was reset by the doctor, pulling on the man’s arm.  The broken arm was set using a sort of medical prepreg Kevlar that was kicked off when exposed to fresh water. Having that kind of training and equipment made a huge difference to those crewmen.

Burns of course, are one of the major causes of medical problems while offshore. One group we came across while taking a boat from Cape Town, South Africa to the Caribbean had an extremely unfortunate incident. The cook was preparing Thanksgiving dinner while sailing in a large seaway, and a pot of boiling water was tossed off the stove onto her.  She suffered for three days while they made for St. Helena Island in the South Atlantic. She was then confined to the hospital for another three days while she healed.  It might have been avoided if she had not been boiling water in an unsuitable sea state or had been wearing a set of foul weather bib pants while cooking.  Her pain while still underway could have been lessened if they had sufficient painkillers and burn ointment.

There are even tricks that can be employed to lessen the effects of seasickness. Whether you use one kind of medication or another, pressure point wrist bands or other kinds of prevention, you might want to keep a case of Pedialyte onboard to help rehydrate those afflicted with seasickness. Seasickness can be a very serious malady over time.  It should be treated with that in mind.

As it turned out, Viktor Yazykov didn’t bleed to death as a result of his abscess or his self-inflicted therapy.  He managed to survive. He was strong and determined. But there are other approaches that you may find somewhat more convenient, and those approaches begin with training. A phone number or a good medical book may provide a start towards resolving medical issues onboard your boat.  But they’re unlikely to provide the answer you would really like in an emergency.  Put yourself in front of the information, and be prepared before it becomes a necessity. You really don’t want to fumble the situation while attempting to find a solution. 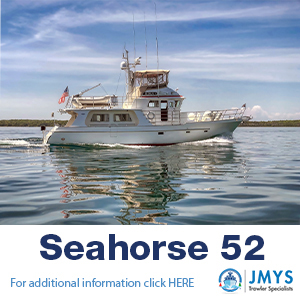