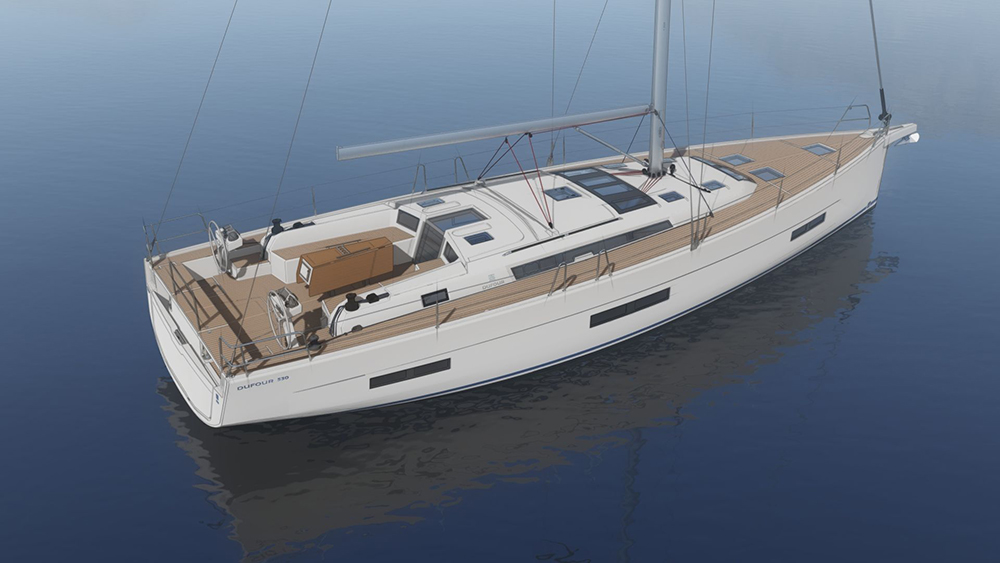 With a long history and a solid tradition of building elegant performance cruising and racing boats, you might think that the company would rest on its laurels and emphasize in their new boats the qualities that made the company successful in the first place. But, in its latest iteration and under the new ownership of catamaran giant Fountaine Pajot, Dufour is once again innovating, breaking norms and moving fast.

Last year the company introduced to North America two new designs, the 390 and 430, that were designed by Felci Yachts Design in Italy. These new and thoroughly modern racer cruisers have a very distinctive and edgy look and are notable for their sailing performance and ease of handling.

In 2020, Dufour will launch the all-new 530, which they call their “innovation pioneer.” The boat has a Felci performance hull that can be adapted into three very distinct variations called Performance, Ocean and Easy. 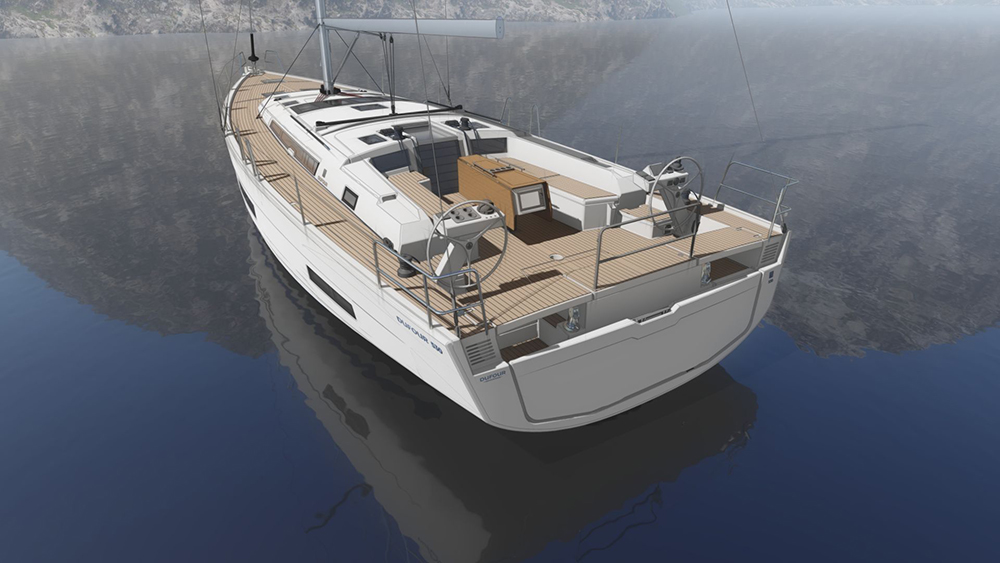 We’ll start with the basic platform that is common to all three models. The Felci designed hull has a plumb bow and squared off transom that folds down to make a wide swim platform The sheer line is flat and modern  while the hull sections are very full, especially forward. The design maintains its maximum beam all the way aft so the boat has a pumpkin seed shape common in modern racing boats and has a very long waterline. This hull shape will provide a fairly smooth ride at sea and will have a lot of power and speed reaching and running.

Under the water, the 530 has a high aspect spade rudder. The keels on the Easy and Ocean models are standard cruising fins with an aft-swept bulb. The Performance keel is deeper and has a T-bulb for greater stability and upwind performance.

All three models share the same basic deck, with a low slung cabintop, a broad foredeck, bowsprits that double as anchor rollers and nice wide side decks.  The cockpit is huge with twin wheels. The transom folds down and an optional grill can be installed aft so you can cook while standing on the swim platform. On the Easy and Ocean models a large drop-leaf table is installed that will seat six for meals. In the Performance model, the table is left out. 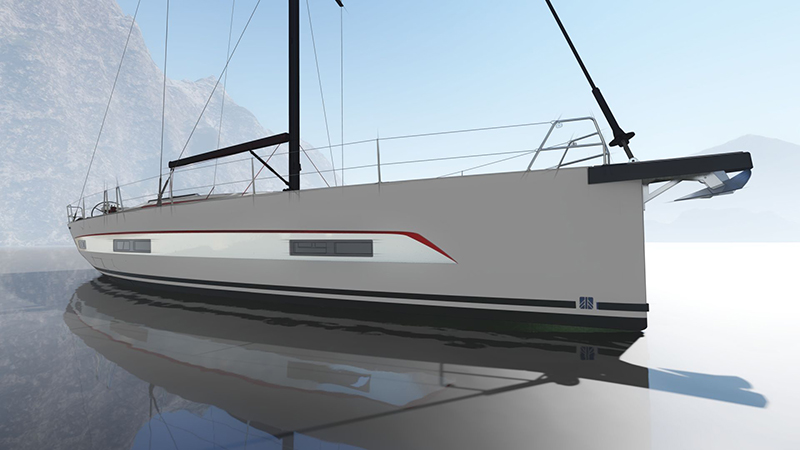 The Easy and Ocean models have traditional cruising rigs and can have a self-tacking jib as standard with a reacher or downwind sail that tacks down on the bowsprit. The Easy has a mid-boom, single main sheet system without a traveler while the Offshore has a mid-boom, main sheet traveler and a double ended German-style sheeting system. In both cases the main can be trimmed while crew is sitting at the cockpit table and the dodger is raised over the companionway.

The Performance has a taller rig and longer boom and the main sheet leads from the boom’s aft end to the cockpit floor. No traveler is shown in the drawings but if you were going to race competitively, you would most likely want one that can be played up and down in puffy conditions.

The side stays and cap shrouds lead to chainplates outboard on the gunnels so you don’t have to duck when you walk forward and the headsails can be trimmed inside the stays. 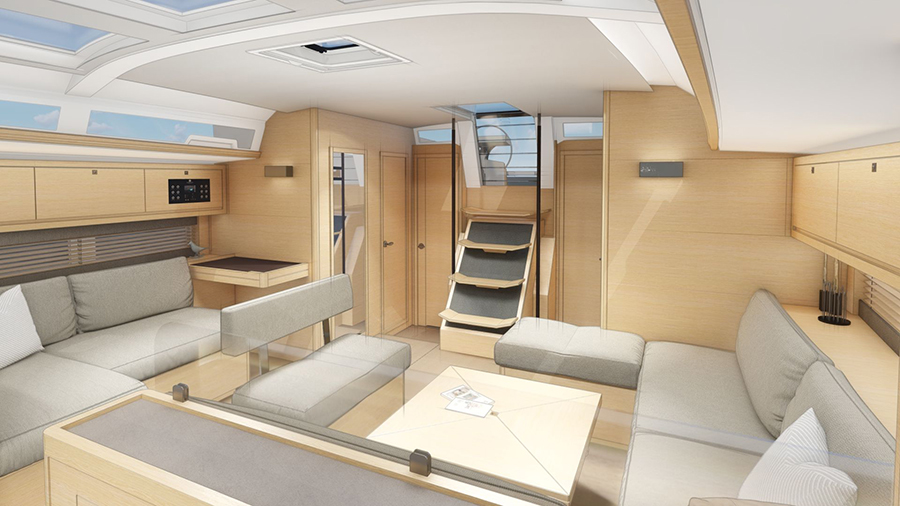 The galley in the standard three-cabin, three head plan is forward of the dinette and settees and runs across the boat with the passage to the forward cabin in the middle. This gives great working spaces for preparing meals and tons of storage.

The U-shaped galley on the port side will allow up to eight people to sit down for dinner. The table can be raised and lowered to be either a coffee table or a dining table. The saloon has a lot of natural light that filters through the three huge deck hatches, the cabin side windows and the large square ports in the hull. 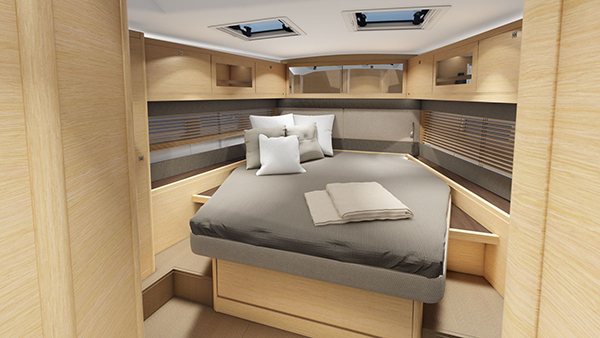 Dufour’s styling is Euro-modern with the use of minimalist cabinet and hardware design. They use light colored woods on the bulkheads and  drawers and doors, light colored fabrics and a white overhead for a combined effect of warmth and light.

The new Dufour 530 is a big boat with a lot of sailing power built into her hull and rig. You can build the version you like from the many options to meet the kind of sailing you will be doing. What Dufour has essentially done is to take the elegance of the Grande Large cruising line of Dufours and merged that with the technology and performance of the Performance line. The net result is a boat, or boats, that are the best of both worlds.