With disruption and quarantines affecting everyone everywhere, it is no surprise that cruisers and sailors in the Caribbean, who are used to moving freely from island nation to island nation, will find life much more difficult. Here’s a letter from Hank Schmitt, the founder and president of Offshore Passage Opportunities, the crew finding service, who makes St. Maartin his base every winter and has done so for more than 20 years. But no more. He was evicted and obviously feels unhappy about it. No doubt, these are trying time.  This letter and the images first appeared on Charlie Doane’s newsy and useful website wavetrain.net.  GD

We have a saying in America. When the chips are down you find out who your real friends are. Of course, friendship goes two ways.

Have I been a friend to St. Maarten?

I first came to SXM in 1993 when I completed a doublehanded transatlantic crossing. My dad had built up seven weeks of timeshare at the Pelican Resort.

He introduced me to a local who he had taken under his wing to help get his business going. My dad was asked to be the godfather for his daughter. My dad is gone, but his godchild finished school in Paris and is now an aspiring model. After Hurricane Irma hit the island in September 2017, at the end of that fateful first post-storm season, her father told me he had to get money to put a cement roof on his house before the next hurricane season came. I wrote him a check for $5,000 in exchange for two years of future rental car use whenever I was on the island. If things had gone well that debt would have been paid at the end of this season.

After Irma, another local businessman, who had done work on my boat, asked me at the end of April if I could help him buy a hurricane-damaged boat so he would have a project to work on over the summer. I said yes and he and another worker have been employed (until now) to finish the boat.

My next visit was in 1998 as I captained a Swan charter boat from Newport RI to St. Maarten. In 2000 I took over the Swan Program and started the NARC Rally (North American Rally to the Caribbean).  I have made the passage from Newport to St. Maarten and back every year since 1998.

2019 was the 20th anniversary rally.  We have always said that we start the Caribbean boating season, since we arrive in mid-November, well before any European boats. Over the past 20 years I have brought hundreds of boats and thousands of crew to St. Maarten. Your Minister of Tourism can better tell you how much money per boat and per person is spent on visits to the island, especially when the boats and crew base out of St. Maarten for their entire winter season.

I have entered my boat in 15 Heineken Regattas starting in 2005. Five years ago I transitioned out of the full-on racing division and entered the Lottery Division, now renamed “Island Time.” I enjoyed racing in this laid-back division and decided to sponsor it to help grow the regatta. This past year was my 4th as a Heineken Regatta sponsor.

After Irma, I was devastated like so many visitors to your island. In my booth at the Newport International Boat Show, just days after Irma hit, I started raising money for St. Maarten. This turned into a campaign to raise money for two islands after Maria hit Dominica, another of my favorite adopted islands. We raised over $50,000.

I booked space on the first commercial flight into St. Maarten after the storm and paid expenses for one of my skippers to fly in and hand out money to our friends at IGY SXM and Jimbos. His job was also to help determine if we could bring the fleet back to St. Maarten one month later. Unfortunately, the answer was no, but I decided to come back myself.  Mine was the only boat in my fleet and one of only three boats to base out of SXM for the post-Irma season.

Two days after arriving in St. Maarten that season, I loaded my boat up with 5 generators, coolers of food, and money and sailed to Dominica, which had no mother country to loan them money to rebuild. In 2015 my company had donated a mooring field to the PAYS Association in Portsmouth, Dominica, to help get boats to visit and spend money. To help get the word out we started an event called “Yachtie Appreciation Week.” 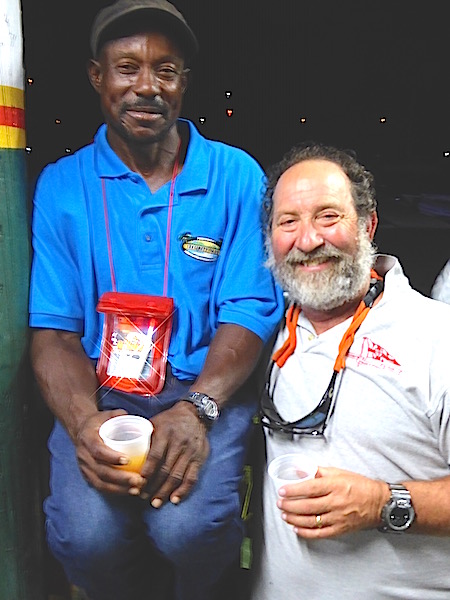 This year, two weeks ago on March 14th, right after the Heineken Regatta, I set sail for Dominica for the 5th Annual YAW (March 15th to 22nd) with 5 charter guests aboard. While we were there the world started to fall apart as the virus took hold outside of China and Europe. By mid-week two crew had flown home to Canada ,which convinced the other three crew to book flights home from Dominica as well. By law, the skipper of a vessel needs to make sure departing crew leave an island before he can sail away. As soon as the last of my crew left Sunday morning, March 22, I left for a solo 24-hour race back to St. Maarten, since the radio net in Dominica said St. Maarten was closing on Monday, March 23. While I was at sea the date was moved up to Sunday at midnight, so when I arrived at 11:00 am for the 11:30 Bridge I was 11 hours too late.

The St. Maarten customs boat came out to tell me the island was closed and that I had to leave immediately. I explained that I had been up for over 30 hours by myself and was too exhausted to depart. In addition, International Maritime Law states that when a boat enters foreign waters with their Q flag flying they have 48 hours to stay at anchor. I started calling some of the sponsors of my NARC Rally, including Chris Marshall at FKG (President of the Marine Trades Association) and Brian Deher who runs IGY Ile de Sol, to see if they could help get me back on the island, my winter base of 20 years where I had stored equipment for my boat and was employing people.

When I realized that they did not want to let too many other boats through the bridge, I offered to stay at anchor for 14 days before returning to my slip at IGY marina. I was refused that option.

The evening of my second day at anchor I was told to go to Customs and Immigration in Simpson Bay first thing in the morning and speak with the supervisor in charge that morning to plead my case.  I arranged to have the IGY launch bring me in at 8:30 AM. I was greeted by a surly supervisor who had zero interest in hearing me out. When I said I was very understanding of the situation and did not want to come ashore and infect anyone (I remind you I had been in St. Maarten from Feb 3 to March 14 and only left for 8 days to go to Dominica, which had no cases at the time), his answer was: “IT HAS NOTHING TO DO WITH THE VIRUS. I COULD BE INFECTED. IT IS ABOUT FOLLOWING THE RULES AND THE PRIME MINISTER SAID NO ONE CAN ENTER!”

I was dumbstruck. How do you answer that? Silly me, I thought the world was falling apart because of the virus.

In the Caribbean where nothing happens on time, at 12:00 noon at the end of my 48 hours stay in quarantine, the Customs and Immigration boat came out with instructions from the supervisor to escort me to the border. They made me feel like a criminal.  I made the mistake of telling them I was going over to Marigot, on the French side, with my Q flag still flying to buy more time for my friends ashore to see if they could get me a reprieve and set up a 14-day quarantine policy for me and any other late arriving boats. Before 9:00 am the next morning I had three French officers tell me that they had a call from the Dutch Customs and Immigration and that I had to leave immediately or be fined.

I am now in St. Thomas. Customs here took me all of ten minutes. I was alone. I have been in the Caribbean for almost 2 months aboard my boat and was obviously not infected.

Now I feel I can never come back to St Maarten. I have a target on my back and will never be left alone when I clear in and out of St. Maarten, as I do multiple times every season. The pandemic will end eventually, but the adverse effects on the global economy may be felt by the tourist industry for years to come.

Is St. Maarten truly the friendly island? I ask the people of St. Maarten to decide and let me know. If you think I was mistreated by Customs and Immigration please let them and your government know. You can e-mail me through my web site at www.sailopo.com