The Swedish builder Hallberg-Rassy has been in business for 75 years and has delivered close to 10,000 cruising sailboats to happy owners around the world. Their boats are known for their pure ocean sailing ability and for the very high level of quality that goes into them. If the designs have remained somewhat traditional and remarkably consistent over the decades, they also have proven to stand up to the rigors of the sea over the long haul and to maintain their value extremely well. For many HR owners, when they finally bought their boat they were buying their ultimate cruising yacht. The new 40C that was introduced at the huge Dusseldorf boats show in January is once again a German Frers design. Of the nearly 10,000 boats HR has built and sold, Frers designed 3600 of them. The 40C is the little sister of the 44 that was launched at Dusseldorf in 2017 and is a study in harmonious design, excellent accommodations and offshore sailing capabilities. 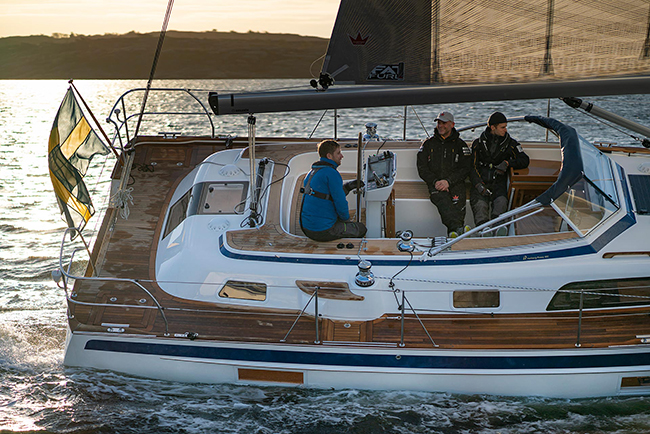 The 40C has a center cockpit that is positioned quite far aft yet it still had a spacious after cabin. The design carries its ample beam all the way aft which provides a lot of power in the hull when running and reaching and offers extra interior volume to make the aft cabin larger than you might think it could be. Because of the wide transom, Frers has given the 40C twin rudders that will not stall out when the boat is heeled over and will make the boat steer like it is on rails when sailing off the wind.

Deck storage is spread between two large lazarette lockers at each quarter aft and a large locker in the bow forward of the forward cabin. The propane bottles stow in a locker sunk into the starboard side deck where it is isolated from the interior and drains any leaking propane harmlessly overboard. The anchor locker in the bow has room for a long length of chain, plus a second anchor and rode. The windlass is mounted below the deck in the anchor locker where it is out of the way.

The rig specified for the boat had a triple spreader in-mast furling main and a nine-tenths fractional headstay with a 110 percent roller furling genoa. A self-tacking jib or a larger genoa are options. With the small bow sprit, that encloses the bow roller for the anchor, you can fly downwind sails either flying free like an asymmetrical spinnaker or on a roller for a reacher or Code Zero. The side stays at set up with the upper shrouds running to the gunwale and the lower diagonal running to the side of the coach roof so you can walk forward without having to duck under it. Down below, HR and Frers have done a masterful job of using all of the available interior volume to best effect. The after stateroom is larger than you’ll find on much bigger boats. You have the option of a center-line double or a single and double V-arrangement that will be great when on passage. There is no aft head. The forward cabin has a large V-berth and the single head and shower are just aft to port. The saloon has the L-shaped dinette to port with a large two-leaf table, across from it are the HR standard arm chairs with a built-in table between them. The navigation station is a proper chart table that is at the base of the companionway ladder and to port. HR offers two galley options that they call either “large” or “enormous.” The enormous version has an acre of counter space, twin sinks, a four-burner stove and over and two fridge boxes. An optional freezer can be added next to the chart table. The large version has less counter space and only one fridge. HR traditionally finishes their boats’ interiors in varnished mahogany. This gives the interiors a traditional look and a warmth that is very pleasant on cool nights. But, in the 40C and other HRs you can now get the interior finished in a light colored oak. Coupled with the larger hull ports and overhead hatches, the interior of the 40C will be bright and inviting.

You see Hallberg-Rassys in all of the world’s best and far flung cruising destinations. Often sailed by couples, these voyaging boats have all the pedigree to be true passagemakers and circumnavigators. After 75 years and nearly 10,000 boats, the Swedish craftsmen at HR know how to keep you safe, comfortable and happy at sea. Read more