The Hylas 57 was designed by Bill Dixon and is a great-looking modern take on the traditional Hylas concept. The new 57 is a center-cockpit, raised-deck saloon sloop like the venerable Hylas 46, 49, 54 and 70 but with a real difference.

The 57 has a plumb bow with a bow sprit, a squared off transom and a fairly flat sheer line that all combine to give the boat a powerful, modern and purposeful appearance. The raised deck over the saloon has a low profile and has been given a wrap-around window that looks very cool, like a set of futuristic sunglasses. The boat has high topsides to provide the interior volume so the addition of the huge rectangular windows breaks up the look of the slab sides and adds a ton of natural light to the saloon and cabins.

The cockpit design is where the new 57 really departs from the Hylases of old. It has been pushed quite far aft and divided into two distinct areas, one for helming and line handling and one for relaxing and eating at the centerline table. The addition of a Targa-style arch over the cockpit gets the mainsheet out the way and provides a structure for adding cockpit canvas such as a dodger and Bimini top. Or, you can add a rigid T-top to the arch that will provide some sun and rain protection. A small wind screen at the front the of the cockpit will offer some protection from the wind.

With 17 feet of beam, the use of twin rudders is a good move since even at a fairly low angle of heel a single spade rudder could cavitate and even break free of the water. With the leeward rudder always well planted in the water, you never will lose control of the helm and the boat with track like it is on rails, particularly when sailing fast downwind. The standard keel is a modern cruising fin with a bulb and gives the boat eight feet of draft. The shoal keel has just over six feet of draft and a hydro-dynamic wing design.

The rig has been designed for easy handling by a lone watchkeeper or a couple who like to manage their own boat. With a double spreader in-mast furling main mast, the big main will be simple to reef and unreef from the cockpit. The Solent-style headsail plan has a fairly low cut 110-percent genoa on the inner fore stay and a higher cut 140-percent reaching sail on the headstay.  With its sail plan, you can use the inner genoa for all upwind work  and then roll it up and roll out the reaching sail when off the wind. An asymmetrical spinnaker can be tacked down on the tip of the bowsprit. 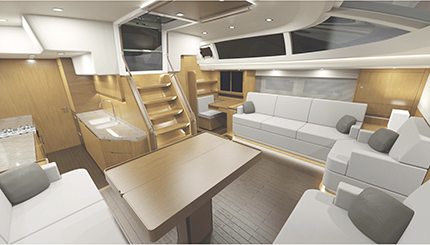 When you first look at the design of the 57 it looks impossible to fit the after cabin directly under the cockpit until you realize just how high the topsides are.  The added volume and headroom and the boat’s 17-foot beam define the 57’s interior with one word: spacious. 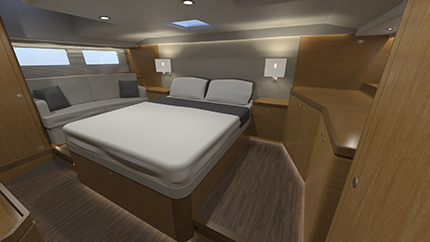 The new 57’s interior styling and finish work looks to be a complete modernization of the old varnished teak that has been the company’s trademark and certainly you can see the hand of a trendy interior designer at work. Instead, it looks like they are using a lot of light colored veneers, white lacquered cabinets, indirect cove lighting and pale fabrics to give the 57 an elegant super-yacht feel.

The new Hylas 57 will debut in 2020 and we look forward to taking it out for a sea trial. It promises to sail well and be both fast and easy to manage. And, the new interior styling looks intriuging and attractive. www.hylasyachts.com.