At the Annapolis sailboat show in October, Dufour Yachts held a reception to introduce the company’s new owners and to roll out two brand new designs. The new corporate owner is none other than Fountaine Pajot, the French builder of high-quality production catamarans. FP has been growing like crazy over the last decade due to the huge surge in popularity for multihulls both as private cruising boats and as charter boats. But, FP never lost sight of the value of monohulls and particularly the long and legendary history of Dufour. 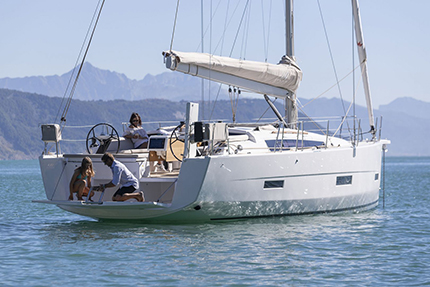 Fifty five years ago, in 1964, Michel Dufour, an ambitious Frenchman who loved to sail, started the fiberglass revolution in Europe. He launched the fist production fiberglass racer cruiser and in the first year took 30 orders. In the second year, he sold 60 boats and by 1971 Dufour was building more than 300 fiberglass cruising and racing sailboats every year. Now, two generations later, Dufour still out sells Jeanneau and Beneteau in France and holds a large market share all over Europe. But not in North America. For a variety of reasons, the Dufour brand had not generated the same magic here that is does in Europe. But, one suspects, that is about to change.

The new 430, like its new sistership the 380, is an essential Euro-style family cruiser that does everything very well. Designed by Felci Yacht in Italy, the new 430 has a plumb bow with a built-in sprit, a flat sheer, a lot of beam that runs all the way aft and a squared off transom that folds down to make a huge stern platform. The boat’s interior volume is immense; I once owned a classic Mason 43 and you could just about fit two of her inside the footprint of the Dufour 430.

The 430 has a simple sloop rig with swept back spreaders. It has a self-tacking jib as standard and you can then either opt for a reaching sail on the bow sprit, which would be a lot of fun and fast, or you can change out the jib for an overlapping genoa. Or you could do both. My choice would be to go with the overlapping genoa and add a larger reaching sail to the bow sprit.

Under the water, the 430 has a moderate bulb-fin keel and a fairly high aspect, ie. thin and narrow, spade rudder. These are efficient shapes and will enhance the boat’s sailing performance. With broad beam and chines in the hull, the 430 and her crew will be happiest and fastest sailing very upright, say, no more than 12 degrees of heel going upwind. Like other boats in this design style, the 430 will want to be reefed early to maintain her balance and best speed. 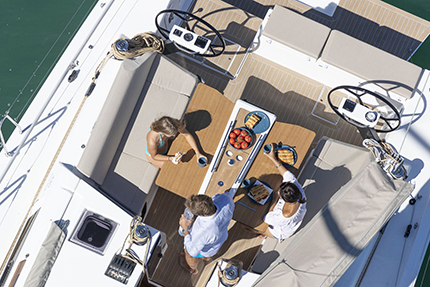 The cockpit is large and spacious with twin wheels on well-designed pods, a centerline table with folding leaves and bench seats for six to dine al fresco.  With the stern platform folded down, the cockpit seems to expand by 25 percent. And, once folded down, you can stand back there and raise the helm seats to reveal a gas grill and a sink where you can barbeque to your heart’s content.

The side decks are wide and with the low design of the cabin top, the visibility from both helms will be excellent. Going forward the anchor system is all contained in the large anchor locker forward where is it out of the way when sailing. 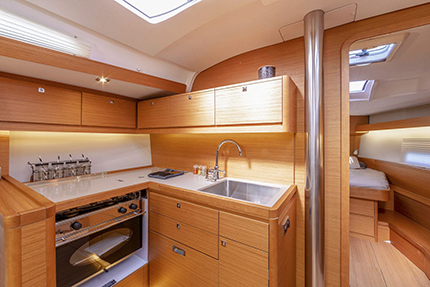 Down below, the 430 has several innovative layout features you won’t see on many boats. In the saloon, the galley is all the way forward, with the stove and sinks to port and another large counter and the drawer refrigerators to starboard. Couples who enjoy cooking together, chef and sous chef, will like this arrangement. 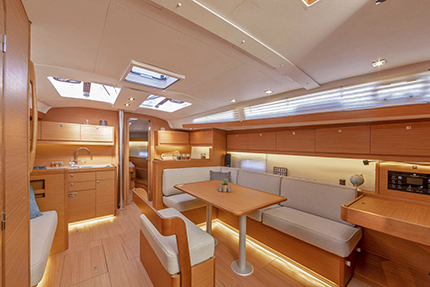 In the standard plan, the large L-shaped sofa or dinette is on the starboard side with the aft-facing chart table behind it. To port there is the aft head and a two-person loveseat.  The standard layout has two good-size quarter cabins aft and a master cabin forward with a walk-around double berth and a large head

The alternate plan is dramatically different, with a small sleeping cabin to starboard with upper and lower single berths. The galley has been moved to the starboard side and a large U-shaped dinette installed to port. But, you still have the two quarter cabins and the master cabin forward.

If you haven’t been on a Dufour recently you will be impressed by the craftsmanship in the hull and deck moldings, the woodwork below and the fine fit and finish of the boats.  They styling is definitely more Euro than traditional American, but the lightness and brightness below deck, combined with pale wood veneers and light-colored fabrics, give the interior a homey and inviting atmosphere.  In the 430, Dufour has, once again, brought out a family cruiser that does everything very well.  For more information go to www.dufour-yachts.com.