Sailing is still a big thing in Europe and no country embraces the power of wind and sail and the romance of the sea more than France. It is home to dozens of sailboat builders and hosts many world-class offshore and coastal sailing events. Plus, the French are constantly pushing the design envelope to garner more speed and performance in both racing and cruising boats. In fact, the latest generation of cruising boats from France all have their roots deeply planted in performance and offshore racing design concepts. None more so than the wizards at Pogo Structures based in Brittany on France’s rugged Atlantic coast.

The shipyard was founded in 1990 by Christian Bouroullec who began his career building one-off custom racing boats, primarily Mini 6.5s that were used in the Mini Transat. Pogo quickly earned a reputation for building winning 6.5s and in 1998 Bouroullec won the transatlantic race in a Pogo 6.5 Series model.  It is good to remember that these intrepid sailors cross the Atlantic solo and at high speed in boats that are 21-feet long. Very French.

Following the popularity in Europe of the Min 6.5 class, Class 40s were introduced in the late 1990s and became incredibly popular over the next two decades. Pogo jumped into the Class 40 frenzy with both feet and in 2006 won the Class 40 double-handed division in the Route de Rhum Race from France to Guadeloupe in the Caribbean.

In the next few years, Pogo developed their swing keel technology that allowed sailors to have a deep fin for serious sailing and racing and a shallow draft for fun close-to-shore cruising. The company won the prestigious European Sailboat of the Year Award in 2009 and 2012, so they obviously were doing something right and something innovative.

While Bouroullec and his crew moved into the performance cruising category with a series of interesting hard chine, swing-keel sloops, they maintained their position as a premier builder of Mini 6.5s. In 2012, Pogo-build Minis won all three races on that year’s Mini Racing calendar.

The latest creation from Pogo is their new Pogo 44 that was conceived as a fast cruising boat for a couple or a crew that wants to sail at the high end of the performance curve without giving up comfortable accommodations below for living aboard. Designed by the French firm Finot-Conq, the 44 is not like your regular production cruising sloops from the likes of Beneteau, Jeanneau or Hanse. Its hull shape is much more like those of the Volvo 60s or the IMOC 60s.

The 44 has fairly low topsides and a flat sheer. It has a plum bow with a bow sprit and a sawed-off transom that is open to the sea. The rig is tall and the mast positioned well aft of where you would find it on a production boat. This creates large foretriangle so the working genoa can be only slightly overlapping at about 105 percent.  This can be a powerful sail and a main driver both upwind and reaching. The rig has no backstays as in many modern French racing boats, so the mainsail can have a large square top. With a fairly short boom and the square top, the sail becomes more like the wing of an airplane than a mainsail with all of the lift and power you would expect from a wing.

The 44 carries its maximum beam all the way aft so the cockpit and the quarter cabins beneath it can be huge. With a hard chine, the hull will be very powerful with large downwind sails. And, because the hull shape is very flat under the water and has a slight curve of rocker under the after sections, the boat will be capable of planning in breezes over 10 to12 knots, given the right conditions and a big enough downwind sail.

The broad beam means the 44 has to have twin rudders which are managed by twin tillers and linked together so both rudders trim in synchrony. The swing keel is a major feature of the 44 and a trademark of Pogo boats and Finot-Conq designs.  With he keel all the way down, the boat draws 10 feet; with the keel swung back into the up position the boat draws about four feet.

Sailing the 44 will be an amazing experience as it is likely to break onto a plane in many conditions and will steer like a finely tuned sports car. The halyards and control lines all lead to stoppers and winches on the cabin top so one lone watchkeeper will be able to jibe the boat, using the autopilot, by herself.

Even though the boat is light and the build high tech, Pogo wanted the 44 to be a cruising boat with comfortable living accommodations for couples or crews who wanted to live board for extended periods.  They were able to achieve this by making the furniture very light, cored composite structures instead of plywood or heavy wood joinery.

You climb down three steps from the cockpit and are greeted by a saloon that is full of light from the wrap-around windows. The centerline of the saloon has the trunk for the swing keel mechanisms. Wrapped around that is an L-shaped dinette to port and the in-line galley to starboard. Aft there are two large quarter cabins that will be comfortable for family and guests. The aft head is at the foot of the companionway where it can double as a wet locker for foul weather gear.

The master cabin in the forepeak is large and commodious with a centerline double berth, head, shower and large hanging locker.  Also available in this forward space is a two-cabin arrangement with upper and lower bunk berths to starboard and a double cabin to port. 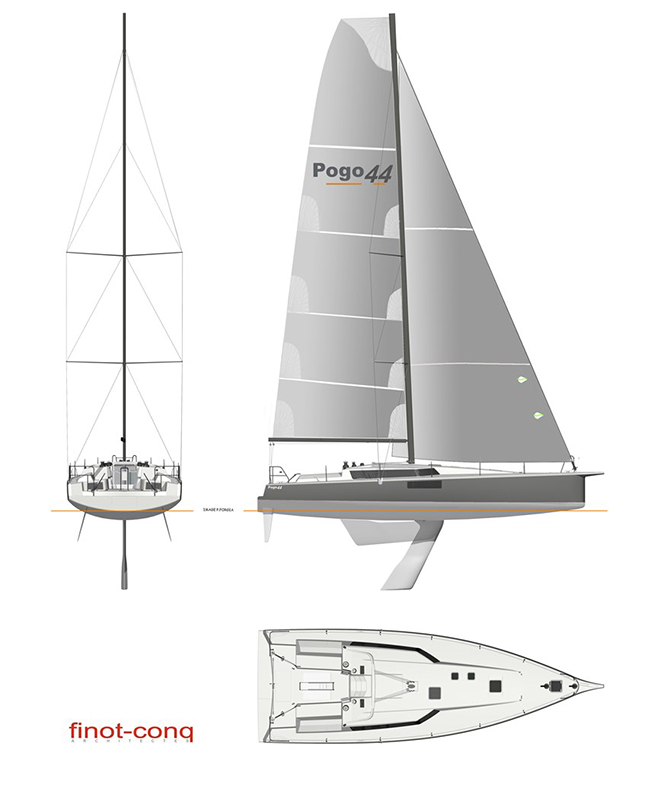 The whole ambience of the 44 is of minimal but completely stylish comfort. You can imagine yourself in an ultra-modern Parian condo with huge windows and the sea all around you.

Who would want to sail and cruise in a boat like the Pogo 44? Well, I think younger sailors with a need for speed and the desire to sail a boat that is at the cutting edge of cruising-boat design.  Plus, it will be just a lot of fun and will make every hour on the water special.  Dyed in the wool traditionalists, however, need not apply.  At under 300,000 Euros, it is not wildly expensive either, considering the technology, design and performance you get as a reward.  (By comparison, a 2020 Jeanneau 440 starts at about $294,000).