Despite Cobid-19 restrictions, the Salty Dawg Sailing Association successfully completed the 2021 fall Rally to the Caribbean and Bahamas. The rally fleet departed from Hampton, VA in late October and saw 82 cruising boats and some 300 skippers and crew make the passages south safely and in company. This year’s fleet was comprised of 60 percent monohulls and 40 percent multihulls. The rally has two designated destinations, Antigua in the Caribbean and The Abacos in The Bahamas.

SDSA President Hank George noted, “The rally went off well and the crew had mostly good weather in both the Antigua cand Bahamas contingents. With weather and routing support from Chris Parker of Marine Weather Center and with shoreside support from the SDSA rally management team, the large fleet was able to choose the safest routes and rely upon constant tracking and communications.”

The Fall Rally to the Caribbean and Bahamas is the flagship rally for the SDSA and is the largest offshore rally leaving from the East Coast. The SDSA also runs rallies to Maine and the Canadian Maritimes. Rally Director and Antigua Port Office, Bob Osborn said, “Due to Covid safety considerations, the fleet that gathered in Hampton before the start could not participate in the usual social events, which has always included a large Halloween party. Chris Parker’s weather briefings before the start indicated a good weather window early so most boats headed out as soon as they could. They found mostly light winds and several boats in the Antigua fleet motored a least half the way.”

In both Antigua and the Bahamas, numerous social events and fleet parties awaited the sailors that included cocktail parties, lawn parties and the big arrival dinners. According to Bob Osborn, all of the events were held under Covid protocols for the host countries and as a precaution, both at sea and after landfall, all sailors in the rally had show proof that they had been fully vaccinated. This also meant sailors could enter the host countries with minimal difficulty.

While the majority of the fleet made the 1,600-mile passage to Antigua without incident, one boat did find itself with a broken forestay, a tangled propeller and battery charging issues. The SDSA Shoreside Coordinators Mindy Puik, Howard Cheetham and Peter Farkas, working with the Emergency Response Team of Kevin Ferrie, Glen Robbins, Jaimie Ultzschneider, Jason Ellis and Kim Ellis, kicked into gear and coordinated with another rally boat and a non-rally boat that was nearby to render assistance. Repairs to the headstay were jury rigged, the prop and battery issues resolved and the boat was able to motor sail into port safely.  Hank George said, “This is a perfect example of sailors helping sailors and of the whole purpose the Salty Dawg Rallies. We are in this together and provide the guidance, coordinat6ion and support to make long distance passage making safer and more fun.” 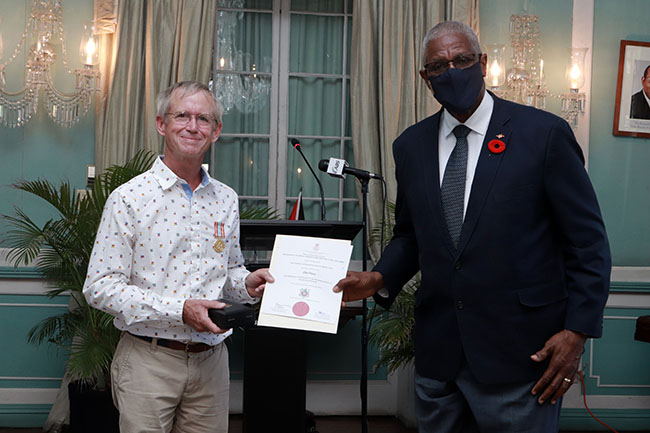 Antigua Offers Special Recognition to the SDSA
The arrival of the Salty Dawg fleet in Antigua in early to mid-November marks the unofficial beginning of the yachting season, bringing vital revenue to the island’s economy. In recognition of this, Antigua Port Office Bob Osborn was honored with the nation’s Faithful and Meritorious Service Medal – Gold award. In a formal ceremony, Antigua’s Governor General Sir Rodney Williams noted that for the past five years the rally and Osborn’s dedication have made a significant contribution to the local yachting industry and the local economy.
Osbourn noted, “This totally unexpected award was a great honor and I accepted it on behalf of the Salty Dawg Sailing Association‘s members, volunteers, sponsors and friends.”