Whether you’re dealing with heavy weather or just taking a break, there are times when slowing the boat makes all the sense in the world  (published August 2014)

As I came up on deck I could see the wide-eyed look in everyone’s faces. The catamaran was going too fast, and no one fully understood what to do.  The speed had crept up on the crew and I could hear it and feel it even while sleeping fitfully below decks. With seas building and the apparent wind angle moving to a close reach, more speed could mean more trouble than anyone wanted to face. It would be a good opportunity to demonstrate the “miracle” of trailing warps off the stern.

On sailboats, most of us spend the vast majority of time trying to figure out how to make the boat go faster. Easing or trimming, a little less helm or a little more sail help create a vast array of tweaks and tricks to speed up the boat and shorten the passage. We’re seldom interested in slowing the boat down. When those rare occasions happen, slowing the boat down can seem like a godsend.  Assumed imminent disaster suddenly fades into a pleasant afternoon or an opportunity to focus more fully on what else needs to be done.

It’s not only multihulls that have been known to move too fast on occasion. There are plenty of ways to adapt to heavy weather if that’s the cause of the added speed. An adept helmsman can pinch the boat up a bit if you’re on a close reach or alternatively one can run off if on a beam reach. Waves can be put forward or aft of the beam to reduce the possibility of being rolled by large breaking waves.

Those heavy weather tactics, of course, don’t only apply to multihulls. Sailors on monohulls can face the same dilemmas. In extremis, you would never want to be beam-on to large breaking waves regardless of the type of sailboat you were aboard. That would be courting disaster. Sometimes, however, running off only adds more speed as the sailboat surfs down increasingly large waves. Pinching the boat up may mean rocketing off waves that seem to have a cliff rather than a back following the crest. The resultant hard slamming may shake the rig so violently that failure seems inevitable. In either case, it’s time to slow the boat down.

The desire to slow the boat down doesn’t only result from heavy weather. There can be other reasons to slow the boat down. Perhaps there is an equipment failure that requires a more stable platform. Perhaps a self-steering vane needs to be repaired. Or perhaps slowing the boat to make a daylight landfall would be more convenient. Speed isn’t everything. Control is. At times, slowing the boat provides just the added control you need to make everyone’s life a little better.

We all have a bag of tricks to make a boat faster. Perhaps it’s time to review some of the various tricks to make the boat go slower. The obvious start is to reduce headsail area, followed by reefing the main. You still want to maintain steerage and control, of course, so there’s a limit on how much sail area you can reduce. In very heavy weather you could conceivably be down to bare poles. Or perhaps you might be flying a storm trysail and/or storm jib. One or both of those sails should give you the ability to maintain steerage and control of the vessel. But if speed down the face of a wave is still more than anyone finds comfortable, you may need to reach a bit deeper into that bag of tricks to slow your speed.

When I arrived on deck finding people disconcerted by the speed of the boat, I suggested that it would be the perfect time to deploy a series of warps. The process is easy enough, and most boats have plenty of equipment to accomplish the task. We already had the dock lines handy. Into one line we tied an eye in the middle of the rope, forming a bridle from which the warps would trail. We tied all of the other dock lines into that eye. With the relatively short bridle line in which the eye had been tied, we put one end around an aft winch on the port quarter, and the other end of the same bridle was secured around an aft winch on the starboard quarter after running that line aft of the backstay, outside of everything in the back of the boat and careful to make sure that the line was clear and would be free from chafe when the warps were deployed off the stern.  We then tossed the warps and bridle off the back of the boat, keeping the two ends of the bridle secured to the two winches. We could control the location of the eye off the back of the boat using the winches. The boat speed went from 16 knots to eight. We were under control, and the remaining storm sails provided enough power to steer the boat.

When it is necessary to slow the boat even more, I will tie overhand knots every two feet in the warps that are attached to the eye of the bridle. The knots add enough friction to further slow the boat. When retrieving the warps, I bring the eye close to one of the winches and merely haul the warps in one at a time. Even with the line knotted for additional drag, it’s not an overly difficult task.

Drogues are also meant to slow the boat down. Deployed from the back of the boat, drogues—as with all types of equipment that have a potentially rapid increase in load—should be deployed with care. If your vessel is traveling at speed and you suddenly introduce a means to slow it down, the added friction will put a substantial load on the line that is holding the drogue. Lines such as warps should be paid out slowly, introducing drag gradually. 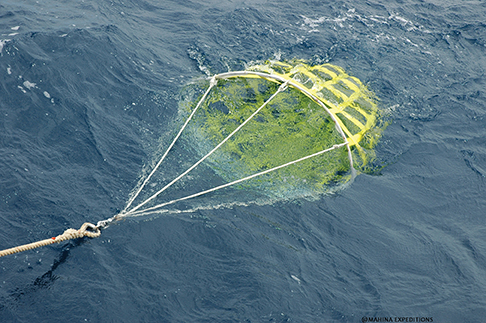 Depending on the type of drogue you might use, the load may be somewhat sudden. The bitter end of the line holding the drogue to the boat should be secured around a winch and tied to avoid losing the drogue. The line should be readily adjustable at the winch, so make sure it has several wraps on the winch and the bitter end is then secured. The line should be flaked out so that the drogue is able to run free without chafe and the line is laid out in a figure eight pattern to insure that there are no knots or tangles. Feet and arms should be kept well clear of the line as it pays out, and everyone on the crew should be aware that the drogue is in the process of being deployed. Everyone clear!  No surprises!

On a different offshore passage on a large trimaran, we discovered that  one of the amas was damaged in 50 knots of wind. It became immediately obvious that we needed to stop the boat for repairs, so we would need to deploy the sea anchor. Generally, sea anchors are meant to be set from the bow and are designed to stop the boat. Stopping the boat in breaking seas, however, puts the vessel at the mercy of the oncoming waves and reduces its ability to diminish the impact by moving with the wave. This can also put the rudders in peril when the boat slides backwards down a wave face.
Since the parachute sea anchor had a trip line that allowed for partial deployment by pulling the center of the parachute forward towards the boat, we decided in this case to deploy the sea anchor from the stern and reduce the sea anchor’s ability to fully deploy.  Basically we were using the sea anchor as a very large drogue that slowed us down to almost a full stop, but still left us with some steering.

Prior to deployment, we had fed the rode into a laundry basket, leaving enough bitter end tail to be led to a winch. With the rode properly stacked in the laundry basket and the bitter end secured to a large winch, we hooked up the sea anchor to the other end of the rode, making sure it was clear to run when we put it over the side. The sea anchor certainly was effective at stopping the boat.  Happily, the winch wasn’t ripped off the deck and neither arms nor legs are part of this story.

The point of all of this is to suggest to the reader that whenever deploying anything meant to slow the boat down, try to slow the boat down first. If the boat is moving at speed and the tether to the sea anchor is short, you will experience an abrupt speed reduction as the line suddenly loads up. If people are in the way, problems can result. 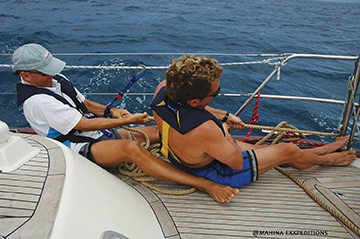 Ideally, whether you use warps, a drogue or a sea anchor, you will have stowed the gear properly, ready to deploy and the load will be introduced gradually either by having the boat at dead slow or by deploying something like warps that can be gradually fed into the sea. Another suggestion is that you should try deploying your gear in 10 or 15 knots of wind under good conditions first. You will learn a lot and have a great time doing it.  And the next time you need to slow your boat down, you will have added more than a few procedures to that ever-expanding bag of tricks.