Problems come in assorted flavors. When they strike your steering system, you need to have a backup plan that will work. Lashing the head door to the spinnaker pole is not among them  (published May 2018)

Many years ago on a delivery from the east coast of the U.S. to the Caribbean, I was engaged to move a small ketch to the BVI. The boat had recently undergone a professional survey that had failed to spot a number of problems. One was the undersized packing around the prop shaft. Another was the aged and cracking rubber bellows in the emergency bilge pumps, and another was the lack of hydraulic pressure in the steering system. By the time we stopped in Bermuda, we had discovered those problems and more. I can now look back on that experience and testify to the fact that whatever doesn’t kill you, makes you stronger… or perhaps wiser… or perhaps more neurotic. In any case, there are quite a few things that deserve checking prior to departure, and when considering hydraulic steering systems, knowing that the hydraulic steering holds pressure and doesn’t leak is among them. Having replacement fluid and a means by which to fill the reservoir while offshore is another.

That, of course is only one of many possible afflictions that can strike your steering system. Those types of problems don’t happen often, but there is a wide array of possible problems. Ultimately, you need to have backup plans. Any and all steering systems can fail. This is not meant to raise alarm. They are usually extremely reliable, lasting for years with few if any problems. It is meant to raise awareness. Because they are so reliable, we seldom think about steering systems until they become a huge problem. At that point, you dearly wish you had given your trusty steering system more thought. Backup plans for steering should be part of that thought process. 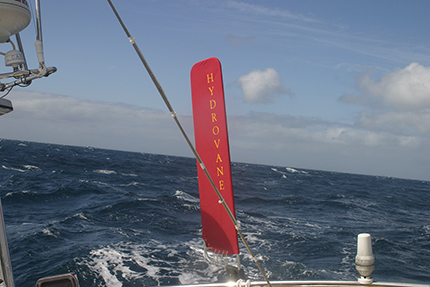 SOLUTIONS TO STEERING ISSUES
My first alternative when suddenly confronting a wheel that no longer steers the boat is to turn on the autopilot. That may solve the problem at least temporarily while determining the real cause of the problem. Cables might be temporarily replaceable with high-tensile line like Spectra or Vectran. If the autopilot is connected to the quadrant and the quadrant fails, you may need to go to an emergency or jury rigged steering system. Forget the idea of tying the head door to the spinnaker pole; that’s a fairy tale that ends badly. Unless you have a machine shop onboard, you won’t be able to fabricate the gudgeons and other pieces necessary to hold that configuration together in a seaway.

Trimming your sails to achieve a particular direction will be tricky to say the least. Of course it will help with whatever solution you decide upon. It’s highly unlikely that you will be able to steer your boat solely relying upon sail trim, but loads will be eased and your jury rig will perform better. In the meantime, you can heave to, slowing the boat to a crawl while you put your plan into effect.

With a failed autopilot while singlehanding a monohull with tiller steering, I’ve used bungee cord to balance the tiller, over-trimming the headsail and properly trimming the main. The boat would alternately pinch into the wind and subsequently fall off when I left the system alone. When I could, I hand steered merely by overriding the bungee cord. The boat zigzagged, but the system allowed me to eat or grab a few minutes of sleep as I lurched my way for 3 days and 600 miles to complete a passage across the North Atlantic.

Mike Birch, at one time the top offshore sailor in France, used a somewhat different method to temporarily control his 90′ catamaran. He tied and placed several buckets on each side of the boat. When he needed to steer to port, he dropped one or two buckets over the side on the left of the boat, slowing that side more than starboard. It worked, despite its lack of elegance.

BEST PRACTICE
Perhaps the best way I’ve found to assist steering in an emergency is using directionally controllable warps. I’ve used them in the Southern Ocean, and one friend of mine used the same system to steer his sloop 1,000 miles to England when his rudder failed. In order to visualize the system, think of a line run from one winch aft to another winch aft, around the back of the boat, outside of the backstay and everything else. In the middle of that line you have tied a loop prior to deploying that line in order to create a bridle. From that loop in the middle you have tied several dock lines which will trail behind your boat. The dock lines are your warps, and if you would like to further reduce speed or use fewer warps, you can tie overhand knots every couple of feet in the warps. With the original bridle mounted on winches, you can now adjust the position of the loop (and trailing warps) behind your boat. That will steer your boat or slow it down in heavy weather conditions. I’ve offered that solution to one crew on their way to the Virgin Islands. With 500 miles remaining in their journey, they were happy to find how well it worked. It’s a system that takes about 20 minutes to create and doesn’t require any tools or equipment other than a few lines. It would be worth trying during your spring shakedown cruise. 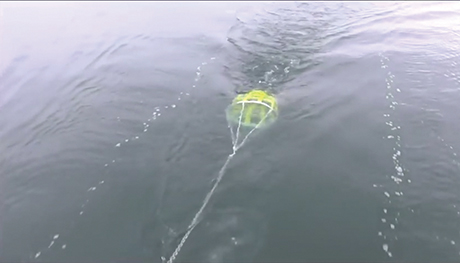 AN ELEGANT SOLUTION
An even more elegant solution to emergency steering has been developed and described by a friend of mine, Mike Keyworth. Formerly a very experienced Maxi captain and a boatyard manager for Brewer’s Yacht Yards, Mike removed the rudder in his Swan 44, Chasseur and experimented with how best to use a Galerider drogue to effectively steer in a variety of wind directions and strengths. They attempted to control their heading using sail trim alone, motoring with various sizes of drogues, and sailing both upwind and downwind with the drogue. A variety of sail combinations were tested, and they experimented with how best to position the drogue. An important aspect of the testing proved to be the size of the drogue. The 12″ drogue provided no directional stability. The 18″ drogue was marginal in winds less than 10 knots, and the 30″ drogue proved effective in all wind speeds tested, as did the 36″ model, although the larger drogue also added more drag, reducing boat speed more significantly.

The results of his experiments have been video recorded, and that video is available for free on YouTube. (See: https://www.youtube.com/watch?v=vupIl68mCYg) I would strongly urge you to watch the video, and perhaps include it as part of a crew brainstorming session to discuss and consider ways to prepare yourselves for an emergency steering situation. It’s better to think about these things over pizza and beer than in the heat of the moment.

Of course all boats are different and will react differently in a variety of conditions. The best way to get to know your own boat is to experiment with it, perhaps lashing the wheel and rudder to centerline and attempting to steer using alternate means. We’re all easily lulled into complacency, but getting home safely requires vigilance and awareness. There can always be the rare and unforeseen events such as a collision or rudder failure. You need to be prepared for those rare circumstances since your safety and the safety of those aboard may depend on it. Simple, regular inspection and maintenance of your steering system can be priceless and will help you to avoid most of the problems associated with steering systems’ cables, hydraulics and the other elements in the system. Problem avoidance is preferable to problem solving. But when the wheel spins lock to lock without a response, steering by another means may be the only way to provide you with a way home.