I grew up sailing dinghies on fickle-winded northeastern lakes, but it wasn’t until I lived on the Chesapeake Bay that sailing became a major part of my life.

It would take a lifetime to describe the many gunkholes, creeks, rivers, islands and towns that I have explored and enjoyed in my 10-plus years sailing the Bay; so, I’ll focus on a few of my favorite destinations. 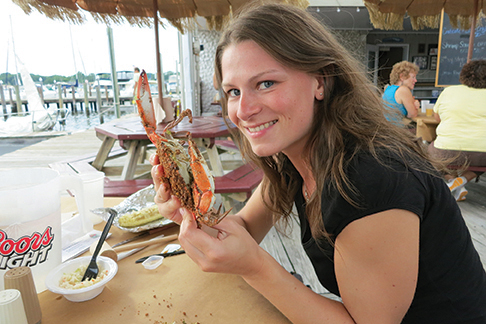 ROCK HALL
One of the first sails I ever did on the Bay was to Rock Hall on the Eastern Shore north of the Bay Bridge. An easy day sail from Annapolis, Rock Hall has changed little over the years, as is evident in Durding’s Store, a soda fountain ice cream shop that has been a fixture on Main Street since 1925. Another Rock Hall tradition is the Kent County Watermen’s Day, the central event being the Work Boat Docking Contest (quite lively when you have a 20-knot cross wind).

No trip to Rock Hall is complete without ordering all-you-can-eat crabs and a bucket of cold Natty Boh beer at one of the town’s two famous waterfront bars, the Harbor Shack and Waterman’s Crab House. However, if you want something a bit more eclectic, try Four Sirens, a high-end fusion burger joint in the heart of town that offers an awesome selection of craft IPAs.

SWAN CREEK
The best place to drop your hook while visiting Rock Hall is in neighboring Swan Creek, which has a large peaceful bucolic anchorage, slips and mooring balls. Swan Creek is walking distance from town, however you can also take the local “trolly” if you need provisions.

There’s also a wonderful historic hotel on Swan Creek called Osprey Point Inn that’s one of my favorite places on the Bay. The inn has a great restaurant as well as bikes, kayaks, a pool, and picnic areas with charcoal grills. 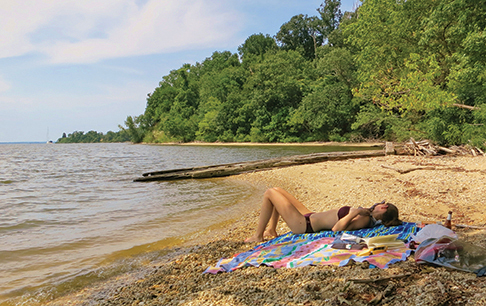 For a more rugged Bay experience sans hotels, bars and restaurants, head a little further north to Worton Creek. Even though it is still only a day’s sail from Annapolis, I’ve never seen it crowded here. The best anchorage is along the north shore in the mouth of the river. You’ll have a great view of the bay, and it’s generally pretty well protected. Worton has a number of marinas and ship chandlers, but no grocery store. There are also a number of great beaches for a little sun and sand downtime.

WYE RIVER
Likely my top spot on the Northern Bay for natural beauty is the Wye River, a 16.3-mile-long tributary that encircles the 2,800-acre wildlife refuge on Wye Island. Located on the northern shore of the Miles River south of Annapolis, Wye Island is rife with bald eagles and great blue herons and also has the largest remaining tract of old growth forest on the Eastern Shore, “Schoolhouse Woods”. 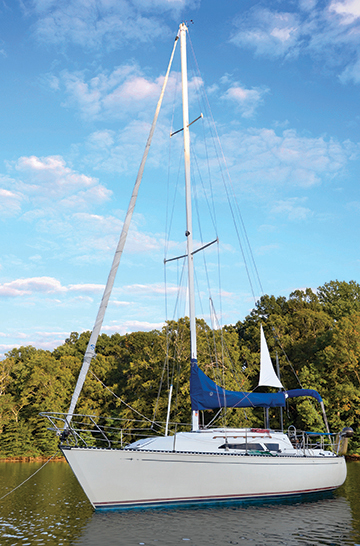 One of the best anchorages in the Wye is Dividing Creek, a protected little cove tucked into Wye Island. It can get a bit crowded on the weekends. However, during the week and early and late season you can often have it all to yourself. If it’s full, no worries; the Wye has many other beautiful protected creeks and bays where you can drop a hook and find your own special paradise; just watch your depth, I’ve run aground in the Wye a couple of times.

After you get settled, I highly recommend taking your dinghy and exploring. There’s an almost endless supply of secluded picnic-perfect beaches along the island’s deserted coastline. On the outer shore, you’ll find some spectacular turn-of-the-century grand old mansions, as this region has long been a favorite getaway for wealthy DC politicos.

ST. MICHAELS
St. Michaels, a short sail from the Wye, is my favorite Eastern Shore town when it comes to great restaurants, shopping and attractions. The shining jewel of St. Michaels is the Chesapeake Bay Maritime Museum. The centerpiece of the museum is historic Hooper Strait Lighthouse, which the museum bought in 1966 and barged 60 miles north to its new home.

There are always a couple of interesting boat restoration projects going on in the museum’s large ship building barns, and visitors are invited to watch and ask questions, as long as they don’t get in the way. They also have many standing exhibits that trace the history of the Bay, including a large number of historic boats moored at the Museum’s docks. 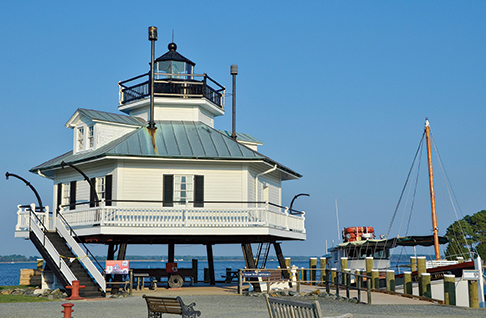 St. Michaels is experiencing a bit of a culinary explosion, so you’ll find much more than just your typical Eastern Shore crab shacks. One of my favorites new places, Mike and Eric’s Front Street Restaurant and Bar, has a varied and unique menu and a wonderfully relaxed atmosphere. If you want something a bit more formal and classic, try 208 Talbot. The chef there is fantastic, as is the wine selection.

ANNAPOLIS
While St. Michaels speaks to the history of sailing, Annapolis, on the western shore of the Bay, is one of America’s great modern sailing Meccas. There are numerous options for slips, moorings and anchorages, however I recommend grabbing a mooring ball in Spa Creek. You’re right in the heart of town and there’s a regular water taxi service. If you’re there on one of the local race nights, you’ll have a front row seat, as the races end right in the mooring field. Don’t worry, they won’t hit you, these sailors are pretty good.
If you need gear and are on a budget, be sure to take a tour of Bacon Sails and Marine Supplies. This second-hand shop has almost everything on offer, and the prices are very good. It’s an absolute must-do for those looking for anything old and obscure. I once picked up a brand new replacement for my 15-year-old autopilot for $100.

If you need work done, Bert Jabin Yacht Yard is your best bet. It’s not the cheapest place, but it’s the most reliable; it’s also one-stop shopping, as they have more sailing subcontractors in Jabin’s yard than anywhere on the Bay. Annapolis is also your best bet for chartering. Dream Yacht Charter just opened a base here and has -a great selection of excellent, high-quality dependable boats. 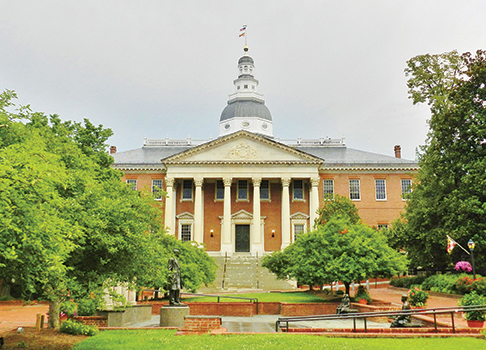 The former capital of the United States, Annapolis has no shortage of historic sites, including the Maryland Statehouse, the Governor’s Mansion, and the Naval Academy. Or, you can spend a lazy afternoon meandering through the small turn-of-the-century maritime houses that make this such a picture-postcard town.

The best breakfast spot in town is Chick and Ruth’s. If you’re there at 8:30 a.m. midweek or 9:30 a.m. on weekends, don’t be surprised when the entire restaurant stops eating, stands up and puts their hand on their hearts to recite the pledge of allegiance—yes it’s a Navy town.

BALTIMORE
If you have the time, I also highly recommend visiting Baltimore. It’s a bit of a haul sailing up the Patapsco River, but it’s worth it. The birthplace of Billie Holiday and Babe Ruth, Baltimore has a lot of good old, blue collar, heart and soul. Grab a slip at Henderson’s Wharf Marina. Located in the heart of Fells Point, you’re within stumbling distance of some of Baltimore’s best bars, restaurants and live music.

If you want a break from your foam mattress and the smell of diesel, The Inn at Henderson’s Wharf is right next to the marina and a great place to hang your hat for the night. For an even more historic experience, try The Admiral Fell Inn. The inn dates back to the 18th century and was once a boarding house, a YMCA and a vinegar and cider-bottling factory. 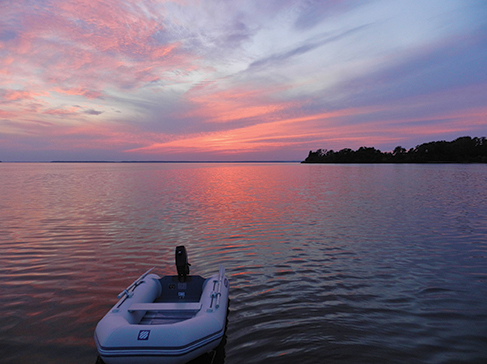 I suppose, one could say I’m a little biased, having lived on the Bay for so many years. However, when I compare the Bay to some of the other wonderful places I’ve sailed (most recently French Polynesia). it holds it’s own, and it’s a lot easier to get to than Bora Bora!

Eric Vohr and Michaela Urban have a travel website and blog at www.travelintense.com.

View all posts by Eric Vohr