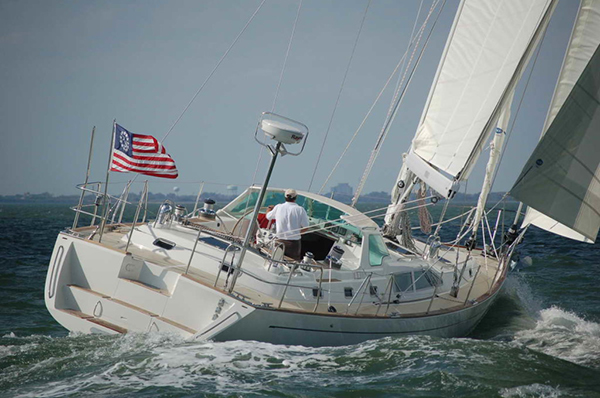 Boat builder and entrepreneur Phil Lambert launched his Outbound Yachts with the Outbound 44 20 years ago. The 44 was a Carl Schumacher design that was intended for intrepid cruising couples and owners who wanted to cross oceans and explore the world in comfort, safety and style. The 44 immediately resonated with experienced sailors and sales were brisk. That design soon evolved into the Outbound 46, which grew the 44 two feet by adding a stern boarding and swim platform.  The 46 remains today the company’s core product and dozens of them have sailed all over the world.

With the 44/46 well established, Lambert decided to design and build an Outbound in the 50-foot plus range. He turned to young yacht designer Tim Kernan for the boat that would end up as the Outbound 52. The 52 is the big sister of the 44/46 but with a difference.

Kernan took the concept of an easily driven hull, with a moderate beam, and Veed sections below the water and elaborated on it to create a boat that would be fast, stable and very seakindly. He and Lambert did not set out to design a floating condo, instead they were creating a voyaging boat for knowledgeable sailors. I know that when I first laid eyes on the 52, I could tell it had true blue water pedigree and when I first sailed the boat, in light air, it showed true thoroughbred performance yet was easy to sail. 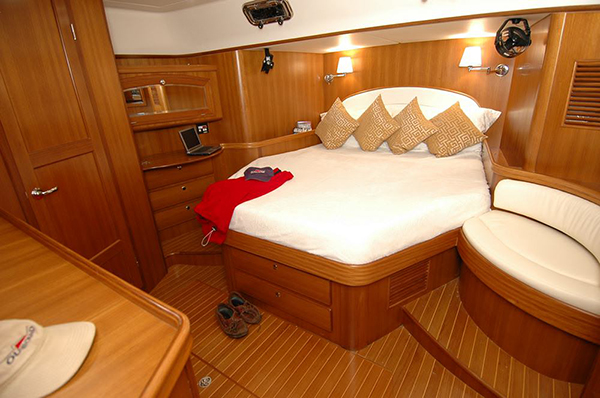 The center cockpit deck configuration allows for a large aft master cabin and en-suite head.  The cockpit is deep and very secure when sailing in bouncy weather. Plus, having a low cockpit sole, it means you only have a few steps down into the saloon. The cabin top is a semi-raised deck saloon design, which looks sleek but also allows for a lot of light in the saloon.  With the built-in hard dodger, the cockpit is well protected yet you can still see forward over the dodger when at the helm.

The 52 has a large rig with a fully battened mainsail, a 125 percent genoa and a staysail. Both headsails are on roller furling units and all headsail sheets and control lines and the single line furling system on the mainsail can be handled from the safety of the cockpit.  Couples often stand watches alone, so it is prudent to be able to sail efficiently without leaving the safety of the cockpit.

Down below, the saloon has an L-shaped dinette to port with a centerline bench so six adults can sit for dinner around the folding table.  There is a bench settee to starboard and just aft is the forward-facing chart table where radios, satphone, a chart plotter and sailing instrument repeaters can be mounted.

The after cabin will be the master suite and has a large centerline double bed, a small sitting bench, ample handing and storage space and a head with a large separate shower. You could move in here and be comfortable at home for years.  One of the benefits of such an aft cabin is the reduced noise while sailing, which translates into better off-watch naps and better sleeping conditions in boisterous anchorages when the anchor chain is talking up a storm.

The forward guest cabin is nearly as commodious as the aft cabin and has all the comfort and storage any visiting couple would need, plus its own head and shower. There is a small single cabin just aft of the chart table for a young person or temporary offshore passage-making crew; this will be the best sea berth on the boat. 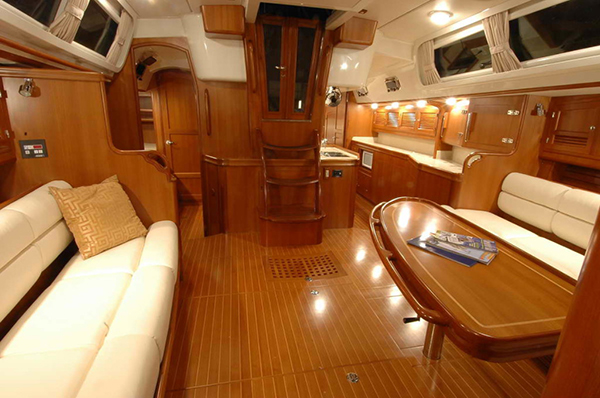 The huge galley is in the passageway that leads aft to the master suite. The four-burner stove and oven and the large sinks are on the inboard side while the pantry, large storage lockers and the fridge/freezer are outboard. This will be a great galley for preparing meals at anchor or at sea.

One of the benefits of the raised desk saloon design is the amount of room freed up below the saloon floor for tanks and batteries. The 52 has tanks for 200 gallons of water and 250 gallons of fuel. That’s a lot of both.  This places all of the weight of water, fuel and batteries (1,000 amp hours) right over the boat’s center of gravity where it belongs.

Two hundred gallons of water will last a crew of four on a long passage for at least 20 days. With the 110-hp diesel auxiliary engine burning about a gallon-per-hour at seven knots, the 52 will have a safe motoring range of almost 1500 miles.

The 52 is built in China in traditional Chinese style with tons of varnished teak, a teak-and-holly sole, many drawers and cabinets and a very warm and classic yacht-style finish. If you have been belowdecks on a Passport or a Hylas, you will see a similarity in both the amount of teak and the fine craftsmanship in the 52. 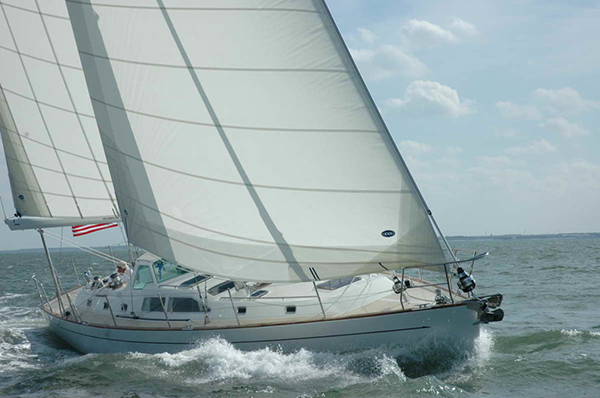 I have sailed hundreds of cruising boats and have owned a few as well. I could easily see my sailing partner and wife, Rosie, and me heading off once again aboard an Outbound 52. Read more here.