There are several ways to define the wind. For weather work at sea we care only about the true wind. This true wind is the speed and the direction of the wind relative to the fixed earth under the ocean. Tied up at the dock, we feel the true wind. Once we get underway, however, our own motion changes the wind we feel, and then it is called the apparent wind.

Many sailors claim that the apparent wind is all they care about, and that can be well argued when it comes to setting sails and judging performance. But to know about the weather patterns that are causing the wind and how the wind is changing, we need to know the direction of the true wind as accurately as possible. Shifts in the true wind are usually the first sign of changing patterns (for more on wind shifts see the June 2013 issue of BWS). If we do not figure this properly, we can miss an important shift. This is not a simple observation though, which is the point at hand. Slight changes in true wind speed affect boat speed, and in turn, the apparent wind speed and direction, which can easily mask a small but important shift in the true wind direction.

To help practically illustrate these points, let’s bring in some shorthand:

Since wind directions are almost always discussed in terms of true directions, not magnetic, we’ll forget the compass for now and consider all directions as being true. Our actual use of compass directions in navigation does indeed complicate things a bit, but that can be sorted out later as it is not really related to the subject at hand.

A bit closer to the point at hand, I could do this same thing, still with S = 5 knots and then I notice that I have AWS = 7.0 knots, still with AWA = 0. Something changed. I check the GPS and see that my SOG = 7.0 knots, and that accounts for the extra wind. I am in a current that is moving the boat at 2.0 knots. Now I need to look at the COG. If the COG is exactly equal to my Heading, then this current is directly on my stern, pushing me forward at DFT = 2.0, SET = 090.

When TWS is not zero, this analysis gets more complex and a vector triangle must be solved, but the key point is always the difference between COG and H. If COG = H, meaning you are moving the direction you are headed, then all of the standard vector triangle solutions for finding true wind will work fine. You just substitute SOG for the S that is in the equations or plotting routines.

Generally, these formulas and plotting routines solve for true wind angle (TWA) based on AWA, AWS and S. Then you apply the TWA to H to get the TWD. That all works fine in those cases, and there are numerous resources online, such as the one included in what we call the NIMA Nav Calculators, which is a free download at www.starpath.com/navpubs.

Once you are being set off course and COG does not equal H, then the standard formulas for computing true wind from apparent will not work properly, because we measure the wind direction relative to H, but our actual motion is in direction of COG. Thus, you can no longer simply work with apparent wind angle (AWA); you have to switch to using apparent wind direction (AWD) and solve the vectors relative to COG, as shown in the sketch opposite. 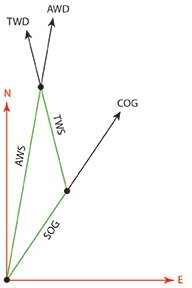 Also, it seems to me that the typical equations we see in books (including my own) that use some form of the Law of Cosines might not be able to handle all the various combinations of directions in this case. It seems safer to get the answer from x-y coordinates, and so we present these formulas, written in a way that can go directly into a spreadsheet or calculator.

Below is a sample computation of an extreme case of strong current showing how different the true wind results are if the COG-H difference is not accounted for. In that table, TWS-x = u, TWS-y = v. 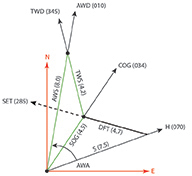 Note: the above picture is more complicated than we need in practice. Once you have figured AWD, you can use your standard plotting method to get the true wind. In other words, usually you do not have to compute SOG and COG; they can be measured from the GPS.

However, it is likely simpler to plot it with actual bearings, rather than as a relative plot using COG as 000. Below is a sample. It is the green triangle that you plot, i.e. plot SOG/COG and plot AWS/AWD and connect the end points to get TWS/TWD.

The spreadsheet format that computes everything will make it easier to experiment with various interactions of sailing and current to see how this affects the final outcome. You can download a copy of this spreadsheet with the equations in it at the tech support page for Modern Marine Weather (www.starpath.com/weatherbook).

One easy test is to measure true wind on one tack compared to the other tack as you tack back and forth in smooth water. This exercise might expose other important issues too, namely that your speed varies noticeably on each tack, implying that the speed sensing is not purely symmetric––assuming the sails are. In big waves, you often expect the speed to be different on opposite tacks, but if the speed sensors and sail trim are working properly, the true wind should be the same on each tack or gybe.

Ben Ellison has pointed out (www.panbo.com) that many performance sailors prefer to know the wind vector relative to the water as opposed to the fixed ground below it, which is what we would get by simply using S for SOG and H for COG. This is the way many instruments compute this data, though many models now offer options. He proposes to call this wind the Water Wind, as opposed to True Wind (which as shown above is not correct), and then do away with the term True Wind and call that Ground Wind.  There is clearly logic in this terminology, and it drives home the point that we should think on these differences. We will have to see how the sport and industry responds.

I am old fashioned in these matters, and will likely stick with true wind, and just check that it is computed properly when it matters. But then, I still use GMT when I should say UTC1.