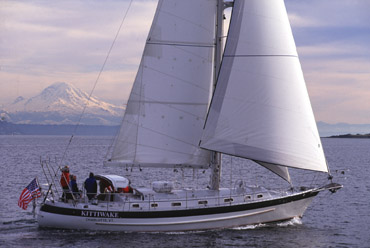 VALIANT 50 • The Valiant 47, now morphed into the Valiant 50, has been carrying passagemakers to destinations both far- and near-flung. This Robert Perry double-ender would never be mistaken for the work of any other designer, although Perry himself will be the first to credit those whose work inspired him, names like Colin Archer and William Atkin.

It would be fair to say that the boats which inspired Perry were known more for their seaworthiness than their speed, and so when Perry set out to design a double-ended cruiser he knew he needed to add a nice turn of speed to the boat.

The original Valiant was the Valiant 40, designed in 1973 and arguably the first “performance cruiser.” Uniflite, a powerboat manufacturer in Bellingham, Wash., began to produce the 40 and between 1975 and 1983 built roughly 50 boats a year under contract with the founders of Valiant Yachts. In 1981 Perry designed the 47, drawing on his experience with the 40 and feedback from those sailing his boats.

Shortly after the new 47 came online the factory in Bellingham shut down and Rich Worstell, a very successful dealer for Valiant, bought the company and moved the manufacturing facilities to Texas. In Gordonville Worstell kept on building Valiants, one at a time, by hand, that were capable of sailing the world.

The Valiant 47 was built from 1981 to 1992, with 17 boats built and delivered. The 47 received a design overhaul in 1993, becoming the Valiant 50, although the first model year was 1994. Perry added a bowsprit to the 47 and moved the mast forward, “something like 13 inches,” he said in a recent conversation. “Over the years I’ve tried to design a boat with as near neutral a helm as possible,” he noted, “because you can always come up with weather helm.”

According to Perry, the 50 balances better than the 47, “but it’s hard to say if it’s a better performer,” he said. “Perhaps in that magic range of 15 to 22 knots you don’t have to compromise trim to keep the helm gentle, maybe then it’s a better performer.” The 50 is, he commented, a more forgiving boat than the 47. “If I did one thing wrong with the 47, it is that I made it too much of a hot rod,” he said. With a new deck mold needed for the altered mast position on the 50, other changes were also made. The 50’s deck mold allows the owner to choose locations for the hatches, portlights and Dorades and to decide on a center or offset companionway.

Today Valiant builds the 42 and the 50, hybrid descendants of the 40 and the 47. They still have the molds for all previous models. “If we fabricated it originally,” said Wally Wells, Valiant’s national sales manager, “we can probably provide a replacement part.” 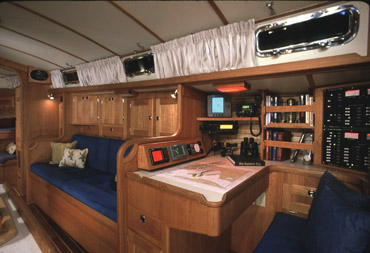 Each Valiant is nearly a custom boat. The sequence of construction begins with a one-piece solid fiberglass hull using isophthalic resin, nearly two inches thick at the turn of the bilge. Floor timbers are made of high-density structural foam covered with fiberglass and glassed to the hull. The sole is solid, half-inch teak-and-holly planking above 3/4-inch marine grade plywood. Bulkheads and interior furniture are then attached to the hull, the deck is fastened (using 5200 and an aluminum toerail through-bolted every 4 1/2 inches) and, finally, the boat’s equipment is installed: the engine, tanks, stove and so on go in last, thus ensuring that anything in the boat can be taken out for repair or replacement at a later time. “The boat is built with long-term maintenance in mind,” said Wells. “We don’t build disposable boats.”

It is a slow process, and each Valiant 50 takes about eight months to build. Hull number 11, their first with a walk-around island berth, will hit the water sometime in November.

The 50 is available with four different basic interior arrangements and two different companionway locations. Within certain limits, hatches, Dorades and winches can be placed where desired and refinements or changes from the basic interior designs are entirely possible. With the labor-intensive building process and individual attention each boat receives, buying a boat

at Valiant is as close to commissioning a custom boat as most people will ever get.

The 47 has an impressive track record. In the 1986 BOC round-the-world race, Mark Schrader’s stock Valiant 47 Lone Star was the only boat to complete the race without stopping for a major repair. Alan Veenstra’s Parvenu has been winning races regularly, everything from the Bermuda 1-2 to the New England Solo to the Trans Lake Michigan Solo. Bill Pinkney’s record-setting (the first African-American) solo circumnavigation, passing under all five Great Capes, was done on Commitment, the second time that particular Valiant 47 had gone around.

It is fair to say that the 50 is every bit as capable a boat as the 47, with the added practical advantages of the bowsprit for both anchoring and sailing. Valiant’s boats have a hard-earned, worldwide reputation, and the 50 represents 30 years of design refinement by Perry combined with a similar number of years in boatbuilding expertise by Valiant Yachts. There are several owner’s groups, which is in itself an indication of the pride and seriousness of Valiant owners.

There is probably not a year that goes by that, somewhere on this watery globe, a Valiant yacht isn’t involved in a circumnavigation. It is a boat designed for far horizons and owned by those seeking them out.

Authorized Valiant dealers are located strategically around the U.S. Their addresses and phone numbers are available from Valiant’s home office in Texas