It was a while ago. Perhaps it’s been too long since the sight of jagged tropical mountains and the smell of freshly baked baguettes pierced the morning.  Now, through a dreamlike haze of time, I can almost see myself, sitting in my apartment office overlooking Rhode Island Sound.  The phone rang.  A woman I had never met was putting together a team to race in the upcoming Pacific Cup from San Francisco to Hawaii. “Would I be interested and available to participate with them?”

“Certainly!” I responded.  It is, after all, the sort of thing that I do.

A brilliant woman, used to running companies and leading people, she had determined that it would be best to have the key individuals get to know each other well before the race by sailing together on a week-long charter in French Polynesia. This was sounding better all the time. But as good as it sounded, reality would greatly exceed even those high expectations.

It was September. Flying from different starting points, five of us would depart from various airports and convene in Tahiti before dawn to catch the first flight into Raiatea, a smaller, less congested island about an hour’s flight out of Papeete. 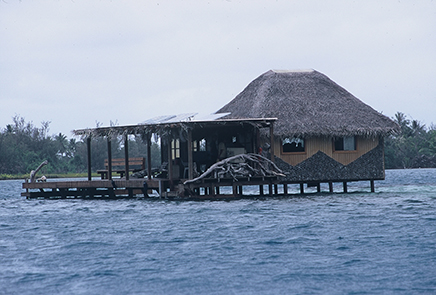 Dealing with The Moorings proved to be effortless. We were met at Raiatea’s small airport at 7:00 am and whisked to their base at the northern end of the island. The extremely knowledgeable and friendly General Manager, Bruno Cadoret, provided a thorough briefing about what to see as well as what to watch out for.

After we spent a little time going over the characteristics and operation of our vessel with Mssr. Cadoret, we were soon underway.  We had an operations manual and, should any problems arise, The Moorings was only a VHF call away.  “Pretty deluxe care!” I thought after decades of running, racing and delivering boats.  Someone else is here to take care of the rare problem rather than myself or others on the crew!  It was a luxury I was happy we didn’t need.  Everything worked flawlessly.  After the briefing, we took some time to go through the boat and provisions and added a few things from the small provisioning store.

While the charter company smoothed the way for a spectacular sailing trip, there were still differences between sailing in French Polynesian and U.S. waters. French Polynesian navigational marks are the same as those used in European coastal waters.  American navigators are used to keeping red marks to the right (red, right, returning) as they bring a vessel from seaward back into port.  The European system—and that used in Polynesia —is to keep red marks to port when returning from seaward (red on the left when returning). 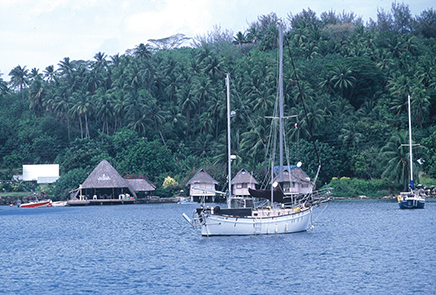 The islands of French Polynesia are surrounded by barrier reefs. Centuries have seen the volcanic islands settle slowly lower while coral reefs continued to grow at the islands’ original periphery.  The result is that waters outside the barrier reef are quite deep and a dark blue in color.  Water in the lagoons inside the barrier reef can be between 75 to 120 feet deep with intermittent shallow patches.  And the water over the reefs can be as shallow as a few feet.

Occasionally we would eat as a team in fabulous little family run restaurants ashore.  The boat sat quietly on its anchor inside the reef at night, often tucked up in some remote little cove. Frequently we ate onboard, each of us helping prepare the meal, clean up and perhaps play a few games of cards at the end of the day.  And midweek, we took a break from sailing altogether, and went diving to explore the underwater sights near the reefs.

On sunny days between 8:00 am and 3:00 or 4:00 pm, it’s relatively easy to determine whether you’re in safe water in a sailboat using eyeball navigation. If the water is dark blue, you’re in very deep water. If you’re in light blue water, the water is most likely sufficiently deep for most sailboats. But, if you’re in yellowish or brownish colored water, you’ll probably need your shoes.  Even dinghies aren’t safe as the brownish coral heads stick up in some spots of the reef.  Rowing or paddling, at times, may be safer than risking the shear pin in the outboard. 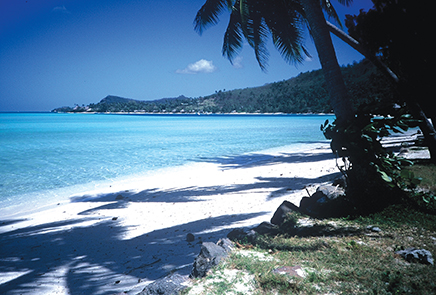 As the sun gets lower in the sky or is covered by clouds, however, it becomes less and less possible to determine the depth by the color of the water. The water assumes a flat shade of slate blue, and it’s easy to sail out of deep water. Even though the marks are in most cases lit, The Moorings requires that their charter boats be anchored or docked at night. And, from a safety standpoint, it certainly makes sense. Getting to an anchorage early allows for some sight-seeing, too. The shallow, clean water provides a perfect place for oysters and pearl farms where visitors can tour the facilities.  Hiking in the mountains, it’s possible to find ancient religious ruins and burial sites.

The barrier reefs surrounding the French Pacific islands have one or more passes through which it is safe for a boat to pass. With surf breaking on both sides of the passes, these cuts through the reef are well marked not only with lateral marks but also in many cases with range markers on shore. Line up the two large, white placards positioned one over the other on the beach and you’re lined up with the channel. Often the charts will also indicate the safe magnetic heading for passage through the channel.

Even when you’re safely within the confines of the barrier reef and the placid light blue waters indicate that you and your vessel seem perfectly safe at anchor, remember that the trade winds are not constant. Wind directions shift.  Squalls can come up in the middle of the night with an increase in wind speed or change in wind direction. Mountains cooling at night can similarly change wind directions. And even if the wind speed is dropping, currents within the barrier reef can slowly swing a boat on its anchor. Leave enough scope on the anchor line to keep you secure in a rising breeze, and allow enough room to swing in all directions and safe water depth within your swinging radius.  To do otherwise invites unwanted midnight maneuvers. 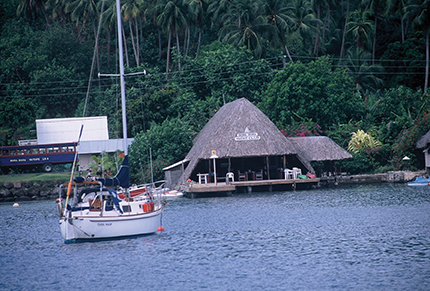 The Moorings provides charts with anchorages clearly marked. In order to preserve the coral as well as to use a safe anchorage, it’s important to use the indicated anchorages. Rising sea temperatures, pollution and other causes are effecting the world’s coral beds. It only makes sense that those of us who use these areas for recreation, pay attention to do our best to care for it rather than drag anchors through the sensitive areas.

Weather, as always, can play an important role in making a trip a success. Even in the Trades, wind directions shift from northeast to southeast and back again over several days. Paying attention to the weather forecasts, it may be possible to plan your itinerary and make your inter-island passages more efficient. If your destination island is Raiatea, and you’re leaving Bora Bora (lying to the northwest of Raiatea), you may be able to fetch Raiatea on a northeasterly breeze, especially if you go around the northern side of Bora Bora on your departure. If you leave Raiatea on a southeasterly, your trip will be quite a bit longer as you tack back and forth to reach your goal. And, of course, if some of the sailors in your party are susceptible to seasickness, doing the longer passages to weather on the calmer days will help everyone enjoy the passage much more. 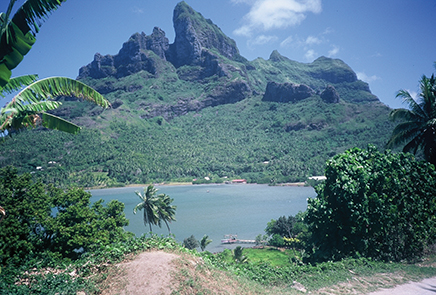 As one tropical day melted into another, it was with a great deal of reluctance that we flew out of Raiatea for our connections in Papeete. In going to French Polynesia, once was certainly not enough. And dreaming about it, only makes me more determined to return and live the dream again.