Technically the hurricane season is behind us. The reality is that while some of the devastation remains in some places, the weather will be idyllic in the Caribbean again this winter  (published January/February 2018)

It was a particularly rough fall for many of the islands in the Caribbean. Hurricanes mercilessly swept across many of them, destroying much of what was in their paths. Puerto Rico, already burdened by economic woes well before hurricane season, was battered more than once and is still a long way from recovery. None of this is news to most of us. However, there are still many places in the Caribbean that are open for business and relatively unscathed by the recent hurricane season and looking forward to a warm, sunny winter. For those of us living up north, “warm”, “sunny” and “winter” may not seem like words that belong in the same sentence, and those of us with short memories or a more idealistic inclination may like to think of the Caribbean as the place of Eternally Beautiful Weather. It too, however, has its good days and its bad – seasons with plenty of brisk sailing breezes, rainy seasons, and intermittent calm periods – often characterized by the time of year. 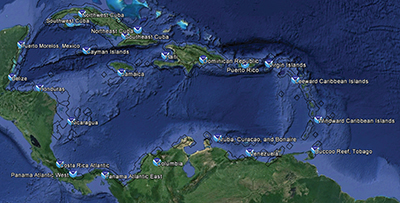 Charter captains and delivery skippers have been waiting since the beginning of November to define the time of year to return to the Caribbean. This year, with much of the island infrastructure still awaiting repairs, there are fewer deliveries south, but some boats – even those aboard which I’ve sailed – are still heading to places like St. Croix, Antigua, St. Lucia or the Bahamas. Hurricane season is, for the most part, at a close. While it’s true that the only month of the year that has no recorded North Atlantic hurricane to its “credit” is April, 15 or 20 years ago even that month “boasted” a tropical storm. Bad weather can occur anytime. But for the most part, November marks the time when the greatest threat of tropical storms or hurricanes has passed.

Boats of all sizes, shapes and means of propulsion are heading south from Europe and North America as the sun’s track across the sky also moves to the south. The fall equinox, September 22nd, 2017, 4:02 PM, EDT marked the time when the sun’s track moved directly over the equator and began tracking further to the south. As the tropical waters in the Northern Hemisphere cooled and the energy that fuels hurricanes began to dissipate in October, the jet stream and associated storm track for migratory extra-tropical lows began their trend to move further to the south.

CHRISTMAS WINDS
The “Christmas winds” of the Caribbean, characteristic of early winter months, is the result of the jet stream assuming a more winter-like pattern and moving to more southern latitudes. Along with the jet stream, low pressure systems track further south. Low pressure systems tend to form more frequently near Cape Hatteras, travel in a more northeasterly direction, perhaps south of Cape Cod and dump snow in New England rather than the more summer-like track nearer northern Vermont. Along with the jet stream and storm tracks moving more south, the extra-tropical high pressure system resident in the North Atlantic also moves to a more southern region. In fact, it seems that any and all weather patterns, along with travelers with any common sense, move south for the winter. The Christmas winds of the Caribbean are waiting. Water temperatures hover around 80 degrees, waves build out of the east with the brisk Northeast Trades and places like the Grenadines only have distant memories of a rare hurricane that took place over a decade ago.

The December and January winds are generally quite reliable, but they’re not always present. The winds will be most consistent when the high pressure is strong and located further to the south, assuming the ITCZ remains in its normal position, somewhere near 4 degrees North Latitude.

Migratory, extra-tropical storms to the north, however, can disrupt the party in the Caribbean even in winter. Fronts from those storms can extend down to the Caribbean as they approach from the northwest. While they may not carry snow with them as they may off New England, pre-frontal conditions in the Caribbean can typically bring calm conditions for a couple of days followed by rain and northerly winds as the front makes its debut further south. For those of us from the north, it may seem like a small price to pay in the short term to avoid the snow and cold back home for a week or two of otherwise perfect sailing weather.

EASING INTO THE CARIBBEAN
March and April typify spring in the Caribbean. March 21st witnesses the sun’s celestial track across the sky back directly above the Equator on it’s way to a more northerly track during the Northern Hemisphere Spring and Summer. Tropical storms are relatively rare. Fronts from the north are somewhat less common, and the days are pleasantly warm while the winds are generally reliable. Welcome to the Spring Regattas of the Caribbean. Whether it’s in St. Maarten, BVI or Antigua, you can find the weather that will be just about perfect to vent the competitive side of your sailing. With sunny days and 15 to 20 knot winds the norm, the temperatures are warm and the competition is hot. 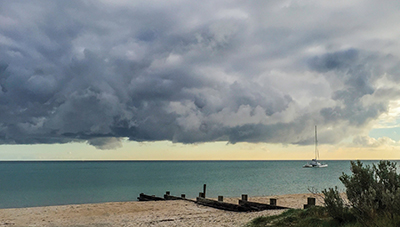 THE HURRICANE CYCLE BEGINS AGAIN
Mid- to late May and June begin to see a reversal in that trend, however. Days begin to get hotter and the winds begin to subside as the sun makes its track directly over the Caribbean again.The jet stream, migratory extra-tropical low-pressure systems, and charter fleets all begin their annual migration back to the north. The more direct sunlight overhead begins to heat the tropical waters more efficiently again, and the energy is again on tap for tropical storm systems.

With the temperatures rising in June and July, more evaporation takes place, putting more moisture into the atmosphere. Rain starts to be more commonplace. Tropical waves, sometimes the precursors to low pressure circulation and the attendant tropical depressions, tropical storms or potential hurricanes, increase in frequency. The Caribbean summer is beginning to get underway. Winds are generally calm. But huge convective, towering cumulus clouds increase in frequency, and they can pack their own punch with high winds along their leading edge and downbursts from above.

Hurricane season hits its peak in September as sea temperatures reach their maximum across the tropical North Atlantic, and wind speeds aloft often are relatively calm. Hurricanes require 81 degree Fahrenheit sea temps and minimal wind speeds aloft in order for the convective systems to reach their full potential. September is the month that most frequently satisfies those criteria. During October, there is generally a substantial drop in the incidence of hurricanes and tropical low-pressure systems. But, as with all tropical low-pressure systems, especially storms or hurricanes, the one you’re in is the most important one of the season.

There is a pattern to it all, and that pattern starts with the movement of the sun’s track across the sky. But patterns don’t tell the entire story. I’ve raced boats to the BVI in late November to be greeted by a tropical wave destined to become a tropical depression. Our fear was that it would become a tropical storm or late season hurricane. It didn’t. But winds still hit 35 to 40 knots and there was 24 inches of rain recorded in a 24-hour period in the BVI. It was raining so hard that it was difficult to see the bow of our 45-foot sailboat during the worst of the downpours!
Trends and understanding their basis is important. You don’t need to be in the Caribbean in December to experience the wonderful and warm “Christmas winds”, but at least as important is understanding the weather that’s around the corner. The “anomalous” weather feature that doesn’t “usually happen” at that time of year is the one you should watch. Stay in touch with the latest weather forecasts. Even sailing in the Caribbean, you can have a lot riding on it.

Bill Biewenga is a navigator, delivery skipper and weather router. His website is www.weather4sailors.com. He can be contacted at billbiewenga@cox.net